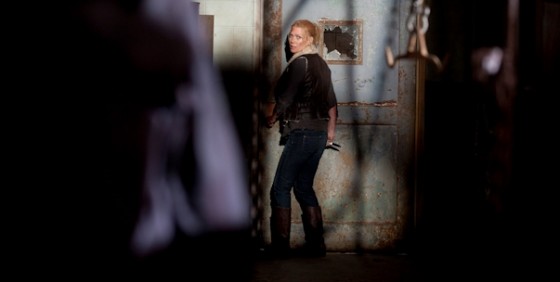 The Walking Dead has often asked the question of who is scarier, the zombies or the survivors. I think we can safely say, after last week, that the Governor is definitely giving the zombies a run for their money. Last Sunday’s new episode was another in the series of excellent, epic episodes and I can’t wait to see what’s next. We have the Making Of and Inside featurettes as well as the Talked About Scene clip from that great intense episode, plus a TV spot for the next one. It has some big shoes to fill.

And for all of you who have been, oh let’s call it “unhappy” with Andrea, hopefully you are feeling a little better about her now. Laurie Holden talks about why it took Andrea so long to come around in this installment of Inside the Episode:


These episodes have been produced so well that I don’t usually think about how they do the zombie scenes, I just react with repulsion, like we’re supposed to. Still, I really appreciate these “Making of” featurettes that deconstruct the nastiness and horror.

Featurette: The Walking Dead – The Making of Episode 314: Prey


It’s not hard to figure out which scene will be highlighted in this week’s “Talked About”:


All right, next episode, show us something:

Okay, I’ll take that as a good indication that this week will fall right in with the run of excellence that has lately been The Walking Dead.