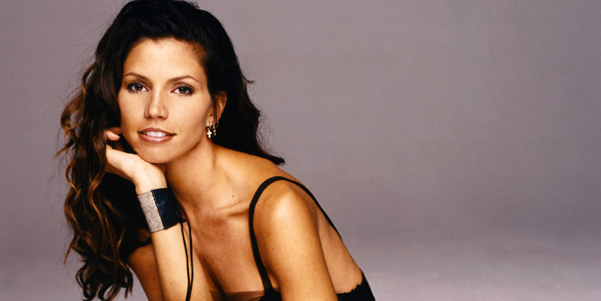 At this past Dallas Comic Con (Jan. 30, 2010), I was lucky enough to snag a few minutes with the gorgeous actress, Charisma Carpenter. Carpenter is most known for her role as Cordelia Chase in Joss Whedon’s “Buffy the Vampire Slayer” and “Angel”.  She has guest starred on other television series, including “Veronica Mars”, “Charmed”, and most recently “Legend of the Seeker”. Carpenter’s next film is action-star packed, “The Expendables” with Sylvester Stallone, Jason Statham, Jet Li, Dolph Lundgren, ‘Stone Cold’ Steve Austin, and more. She plays Lacy, the girlfriend of Jason Statham’s character.  Here’s the transcription of our conversation.

SciFiMafia:  Are you a big sci-fi/fantasy fan?

Carpenter: I’ve become one, for my son’s sake.

SciFiMafia: [laughs] What is he into?

Carpenter: I’m trying to get him into this and be a fan-boy, but to no avail so far. I’ve collected most everyone’s autograph hoping that he’d have appreciation for it, but it’s kinda lost on him still. He’s young.

Carpenter: I hope so. I hope he appreciates it. You know, he has Adam West’s signature, Sean Astin,… I have everybody … like so many!

Carpenter: I hope so! If I were to put [them] all on a wall, his wall would be covered with signed photographs.

SFM: How awesome! I can’t think of a better way to grow up.

Carpenter: None of me though. 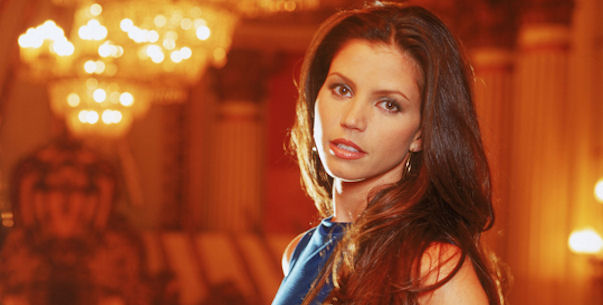 SFM: Well, you’ve had quite a few notable roles in the sci-fi/fantasy genre what do you find in these characters that is a good fit for you? How do you choose these roles?

Carpenter: You know, I don’t think anyone anticipated Buffy to be a scifi … or for it to appeal … it’s not like space travel, like your typical Trekkie stuff.  But I guess if it’s supernatural in some way or a special ability I guess it appeals. I didn’t intentionally seek it out, but I think it has opened my eyes personally to be involved with scifi. I think the fans are awesome and loyal and good and if there’s more to do with scifi stuff, then I’m certainly more inclined to look at it than not look at it. I mean, it would be a bigger influence on me.

SFM: What kind of role would you want if you had your pick of all the roles no matter what genre?

Carpenter: To be honest with you, I’m a mom and I would love to just do half hour sitcoms and do movies that are good with well-written women characters.

SFM: Would you gravitate more towards children as an audience because you’re a mom?

Carpenter: No, I mean it would be great to do voice-overs of an animated series and I had auditioned for that stuff a lot, but whatever works!

SFM: That sounds like so much fun- to be an animated character.

SFM:  Do you prefer working on TV or movies?

Carpenter: I’m familiar with TV and I like the pace of TV, but I don’t have a lot of experience with movies yet. I have a really big feature [The Expendables] coming out and I think it’s real exciting. I’m terrified of seeing me on that big screen.

Carpenter: Well, maybe, I don’t know! It’s scary. The screen is so big and you can see everything. Like Sylvester Stallone was teaching me that you can’t move your eye-line a lot… it’s just things that on TV you don’t have to consider.

SFM: It’s a different scale that you have to get used to…

Carpenter: You have to be in your face, … every fly-away, … It’s so… [sighs] more outwardly conscientious than I’m used to.

SFM: Speaking of “The Expendables”, do you get to kick ass in this film?

SFM: Argh! I was SO hoping to see you toting a big gun or something!

Carpenter: No, I’m on a motorcycle though!

SFM: Well, who was the awesomest to work with on “The Expendables”. It’s like an A-list of action stars.

Carpenter: Stallone. It was very surreal to be working with him.

SFM: Changing subjects real quick, how is working with Joss Whedon as opposed to other directors? Like, is his creative process significantly different?

Carpenter: I don’t know what his process is. I love it when he directs though because even though I had seven years of doing Cordelia, if he came to direct an episode, usually he probably wrote it, but he’d also has another take on it- like a thought about it that might put a twist on how you might say something or the intention behind what you’re saying. He’d put something in my ear and I’d go “Oh my God, I didn’t even think of that.” And he’ll keep doing it until you get it right which I really love. And he takes the time. He’s a good director because he’s actor-driven, into performance, and he really cares about stories. So, to get the writer and the creator to direct is optimum.

SFM: Lastly, I’m a costumer and seeing all the wonderful roles that you’ve had, what was your favorite costume?

Carpenter: [with no hesitation at all] The Mord Sith from “Legend of the Seeker”.

SFM: It looks uncomfortable, but you looked fabulous!

SFM: Did they have to sew you into that? 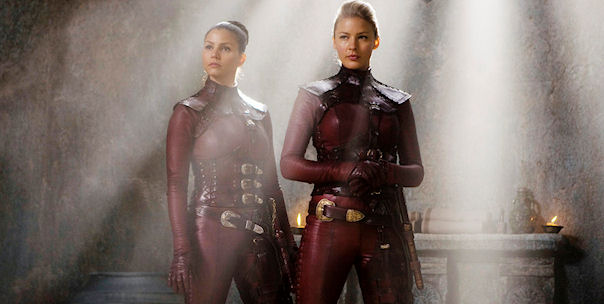 Carpenter:  It’s all custom-[made]. Like I had seams from the top of my arch to around my heel… like stuff you never even have to think about. They were all from “Lord of the Rings”, the seamstress and stuff. It was a factory. It was amazing.

SFM: “Legend of the Seeker” is filmed in New Zealand, right?

Carpenter: Yeah, it was awesome!

SFM: I’m totally envious that you got to go there!

Carpenter: Yeah, it’s a great benefit of being an actress.

Let me just say how wonderful it was to meet Charisma in person. She’s cordial and very approachable. Thank you again, Charisma, for your time at Dallas Comic Con!