EXCLUSIVE Interview with Katee Sackhoff on Starbuck’s Place in Sci-Fi, What’s Next, and How She and Tricia Helfer Are THELMA AND LOUISE Katee Sackhoff who played Starbuck in Ron Moore’s Battlestar Galactica represents an iconic figure of a strong woman in sci-fi. As viewers, we are so used to seeing Sackhoff as a tough and daring space warrior. Would it surprise you that Katee’s completely sweet, charismatic, and even girly? I snagged a few minutes with the effervescent Miss Sackhoff at the Women of Sci-Fi edition of the Sci-Fi Expo to chat.

Here’s our conversation on how she feels about her place in sci-fi, what she’s up to next, our Cylon distraction, and what she’d like to do with her real life BFF, Tricia Helfer. But first, a bit of the Q&A to give you context to what we begin talking about: 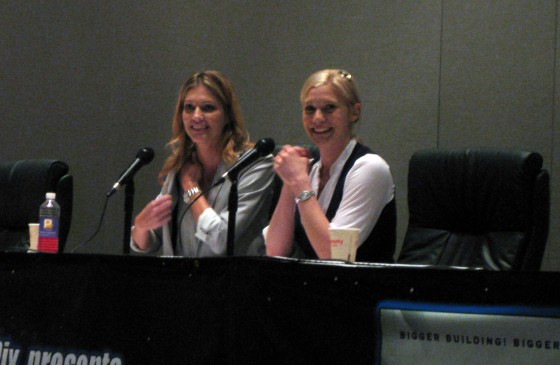 During Katee and Tricia Helfer’s Q&A session, a fan asked “How does it feel to be an icon as a Woman of Sci-Fi and who are your inspirations?”

Katee Sackhoff: I kinda wanna be Sigourney Weaver. In everything she’s ever done, she’s absolutely amazing. Have you guys seen Death and the Maiden? OMG, absolutely amazing. She’s kind of like my idol. I think when I saw Alien,… I was probably seven, and I was like “I wanna be her.”

And how it feels? It’s kinda weird. I can go into West Hollywood in Los Angeles and can get free drinks from all the boys all the time. It’s very interesting playing Starbuck because of what it did. It kind of turned me into this gay icon on both sides of the coin. Gay women wanted to date Starbuck and gay men wanted to be Starbuck. It’s this weird thing and it’s fantastic that she’s like this equal opportunity character, you know? It’s been fantastic. I love to go to work and be tough and shot guns and stuff. I think it’s much more fun than to have to sit there and cry all day.

It’s pretty amazing. I mean, people watch things [that we’re in] that I should pay them to watch and create drinking games out of it.

And now, on with the interview: 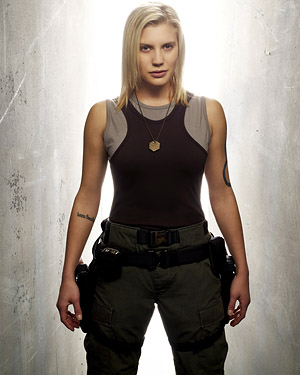 SciFi Mafia: You’ve partially answered this at the Q&A session but seeing that Battlestar Galactica has made an undeniable impact on sci-fi culture. How does it make you feel when young girls say that they look up to Starbuck and that she’s a role model for them?

Katee Sackhoff: I love it. You know, I grew up not really seeing a lot of role models on television for women. There really just wasn’t a lot there and all my role models were men. So I think that when I finally found Sigourney Weaver, that’s when I started to really get excited. I started following everything that she did. It feels good.

You know, I would rather not like people to model themselves after Starbuck completely because she’s not necessarily the best person to model themselves after, but yeah, the strength of her and the drive of her, and her loyalty… I mean there are so many good things about her. Her insecurities and her vulnerability provided all the mistakes that she made really…

SFM: They made her human.

Katee Sackhoff: Yeah, they made her completely human. I love it. I think it means the most to me when women and girls enjoy what I do. I work for my nieces, to try to give them strong role models.

SFM: And thank you very much for doing so!

[laughter on both sides] 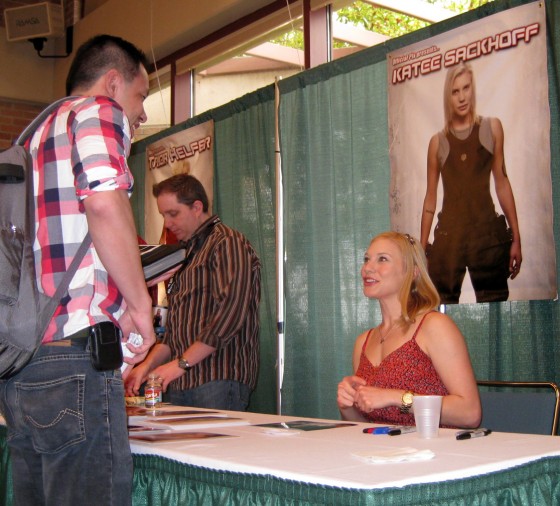 [Above: Katee Sackhoff meeting fan, Sean Koo, who came down all the way from Vancouver to Dallas for the Sci-Fi Expo]

SFM: Well you tweeted on Friday that you had just come from an audition. It sounded like it went well…?

Katee Sackhoff: No, it’s not, but it’s from a sci-fi creator so it’s very different. I started to take my job more seriously about five years ago. I think that up until this point…

[A toddler ventures forth towards us with father in tow. Katee gasps and we both squeal at the happy toddler. Katee gushes, “What are you doing? Oh my gosh, you’re kinda awesome. Does your shirt say ‘Daddy’s little Cylon?’ The father affirms. Katee: I love kids. I love them!]

Katee Sackhoff:  So I started to take my job more seriously and I think the as a result of that is that my auditioning has gotten better. I used to say that I wasn’t a good auditioner. I think it was because I wasn’t trying. I kinda fell into jobs or I would only really try on jobs I knew I could get or that I thought were perfect for me. So, I think now I’m at the point where I actually work hard. Cuz I think you have to the older you get into this business. Especially as a woman, you have to work harder. There’s always somebody younger and probably more talented right behind you that would work for a lot less money.

[laughter on both sides]

You have to consistently do well. So I think the audition went really well. I have auditioned for this person many, many times and it’s been one of those things.

SFM: Can you hint what it is?

Katee Sackhoff: No, I can’t! I have auditioned for him many, many times and it has always comes down to me and another girl and it hasn’t been me so I’m like “It’s my turn now, right? Cuz he’s hired everybody else”

SFM: Yeah! We’ll keep our fingers crossed for this one for you.

Katee Sackhoff: Thank you. Thank you very much. 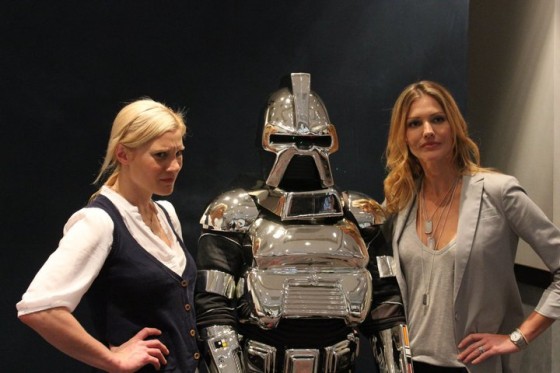 SFM: So you’ve done sci-fi, drama, and comedy (with Big Bang). The other night during your Acting Outlaws (Tricia & Katee’s passion project. More on this soon) broadcast, you mentioned something about a sisters sitcom that you wish you and Tricia were cast in?

Katee Sackhoff: Yes! Yeah, well there was this show at ABC called Partners that Tricia and I both wanted to be in about two sisters that are both police officers. One’s older and one’s younger and we said to them that we came as a package deal. Like we’ll audition separately, but we’d love to audition together because what these shows are always looking for especially as a pilot, is that they are looking for a comraderie, that built-in chemistry. Number one, Tricia and I have that chemistry but also since Battlestar Galactica I think she and I have only played police officers. We’ve played police officers and agents or some sort so it’s not like we can’t do it. So we’re both kinda sitting there like, “Really guys? Come on!” And they said “No.”

But what would be your ideal show if Tricia and you could have your own show?

Katee Sackhoff: It would probably be Thelma and Louise. 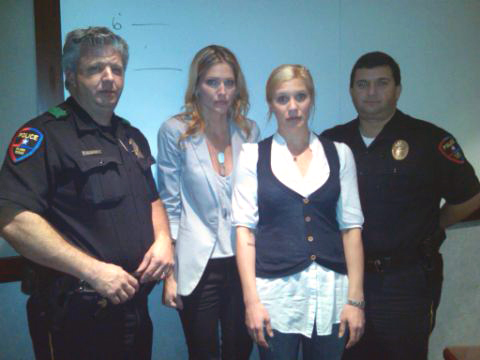 [Above: Katee Sackhoff posted this pic of her and Tricia with the caption “Tricia and I got in a lil trouble in Dallas!” She’s kidding, of course!]

Katee Sackhoff: I think we’d have so much fun doing that. Tricia and I really have a lot of fun together. She’s a fantastic actress and so it would be really fun to work with her. I’d love to work with her.

SFM: My editor in chief, Jason, wanted me to tell you that “You are awesome on CSI and you need to keep doing voice work ‘cuz he loves him some Bitch Puddin’.”

Katee Sackhoff: Oh my God, I love Bitch Puddin’, too. I love doing voice over work and Seth Green is a friend of mine. He and his wife Claire. I would follow he and Breckin Meyer anywhere.

Katee Sackhoff: Oh, thank you. Thank you very much. I enjoy it. 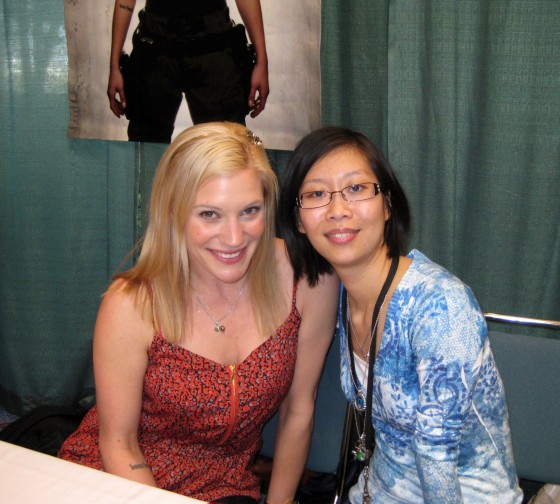 A warm thank you to Katee Sackhoff for coming to Dallas and for sitting with me to chat. We hope to see her in more sci-fi or the next great police procedural… either way, we’re anxious to see where she’d land next and make a drinking game out of it in her honor!

For more coverage and exclusive interviews from the Sci-Fi Expo and the Women of Sci-Fi, including an interview with Tricia Helfer, click here.