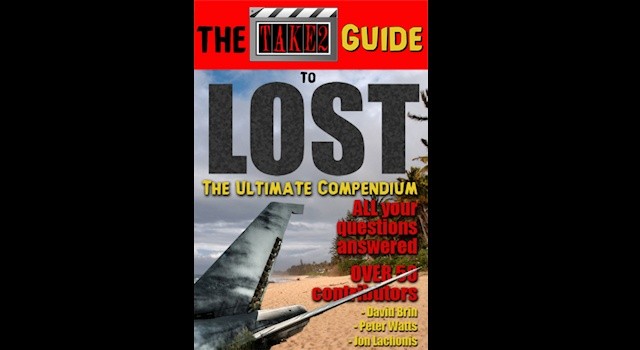 It’s no secret that I feel that Lost is the best series on TV ever. It’s on my profile on SciFi Mafia‘s About page and on my social media accounts, and is practically tattooed across my forehead (practically, not actually). I was therefore honored and completely thrilled to be brought on board a year ago to co-edit the The Take2 Guide to Lost. Not only did I get to spend most of the past year completely immersed in my favorite TV series world, but I was working with posts from some of my favorite Lost bloggers, including Jo Garfein, Erika Olson, Jon Lachonis, and Karen Mauro.

Take2 Publishing, as you can see in the press release below, specializes in gathering blog posts and website articles on a subject from the entertainment world, and organizing them into an eBook. Don’t worry; it’s with the authors’ permission, and they get royalties.

But in the case of the Take2 Guide to Lost, it isn’t just any eBook, or any Lost book. It. Is. GIGANTIC. Far too big for a hardcopy book. Over two thousand pages, depending on the format, with more than 50 contributors, including J.R.R. Tolkien’s grandson and writers from the Huffington Post.

Articles have been organized into various chapters like Philosophy, Mythology, and The Ending (a balanced, multi-part chapter, including a post entitled “ABC’s Lost: The Ultimate Theory and Explanation,” which knocked me off my feet), but the bulk of the book is the Episode Guide. Each guide entry includes a synopsis; two reviews; best lines, a list of any books, TV shows, movies, and other media referenced; and more.

Check out the press release below for more, including a link to a free download of over 400 pages. If you’re ready to dive into the whole thing, click on the ad on the sidebar for a 20% discount! (Click on the ad, then click on the dropdown to choose the format. To enter the discount code, click on the Order Summary.)

According to contributors of the just-released Take2 Guide to Lost, the mysterious Island is in the South Pacific, about 300 miles SE of Micronesia and about 400 miles SW of the Marshall Islands. In fact, it can be found at 4°08’15.0″ N, 162°03’42.0″ E. (Note the numbers that make up those coordinates!)

New York, NY – The Take2 Guide to Lost, available now at all the major eBook sellers, is a definitive resource of over 400 articles from an incredible community of Lost-lovers. More than 50 contributors, comprising established reviewers, academics, award-winning sci-fi authors, and lay writers, ask and answer all your questions in this ultimate eBook compendium  on one of the most successful TV shows ever.

It is from those contributors’ insights that the exact location of the Island can be found.

As we all know, Oceanic flight 815 took off from Sydney, Australia, destined for Los Angeles … and never arrived.

According to the airliner’s pilot, just before dying at the hands of the Smoke Monster in the pilot episode, “six hours in, our radio went out, no one could see us. We turned back to land in Fiji and by the time we hit the turbulence we were a thousand miles off course.”

According to author, blogger, and contributor to the book Kevin Kawa, “this would mean that after six hours of flight they would have traveled past Fiji putting them somewhere above the equator. In circling back to Fiji they probably would have been heading north when the turbulence hit and they lost control. This would put them in the general vicinity of Micronesia and the Marshall Islands. This is exactly where you would find the coordinates 4°08’15.0″ N, 162°03’42.0″ E”.

Although we’re all very clear that the Island moved through time and space across the millennia, it is still pretty certain that it would have remained around this location at the time the DHARMA Initiative arrived, as well as when the French expedition with Danielle Rousseau arrived (and also heard the ‘Numbers’ transmission).

Contributor Julie Kushner, of TV Recappers Anonymous, agrees with Kawa. “If you use the ‘Numbers’ as geographical coordinates, you actually come to a position in the Pacific Ocean, near the Marshall Islands, and not far from Papua New Guinea, which would seem to be the likely location of the Island during the DHARMA era,” she said.

Another contributor to the Take2 Guide to Lost, professor of physics and astronomy Dr. Kristine Larsen, points to a further anomaly related to that region. The coordinates are within the area of the Greater Ontong Java Plateau (OJP), a massive oceanic plateau which was formed approximately 120 million years ago. It is still unclear whether the OJP was formed by a ‘bolide’ impact (meteorite) … or by an enormous volcanic eruption, but either way it was certainly a massive event. The movement and ultimate collision of the OJP with the Solomon Islands, geologically known as plate tectonics, was instrumental at lifting parts of the OJP above sea level resulting in the formation of some of the islands in the neighborhood. It should also be noted that the study of magnetic fields within the rocks of the Plateau, paleomagnetism, is primarily used to understand how the Plateau was originally formed.

A sample download of over 400 pages is now available. It contains the full first chapter, a sample of the Cast and Character Guide, the Introduction, the Index for all the other chapters … and the complete Season 1 of the Episode Guide.

It can be downloaded from

Its books are made up of already-published articles, whether they are found online, or from books, magazines and newspapers, paying particular attention to the wonderful writings, their authors and sites, that at the moment are not getting anywhere near the attention they deserve.

All Take2 books must maintain a traditional linear narrative in form, not necessarily of time and place, but of ideas and opinion, and be imbued with one overriding primary directive: to add substance to the discourse on the subject.

It is not just a dedicated publisher of books as ‘bits and bytes,’ but is also one of the world’s first virtual publishers. Although centered in New York, Take2 Publishing employs editors, copy editors, researchers and more in cities all over the world, including New York, London, Melbourne, Tel-Aviv, Kiev, St Louis, San Diego, Los Angeles, and many more.

All Take2 books are published in all recognized digital formats and are available at all key eBook retail sites including Amazon, Google Books, Kobo, Nook Press and Apple’s iBookstore.

Take2 Publishing also maintains its own online retail store for direct purchases in all formats.