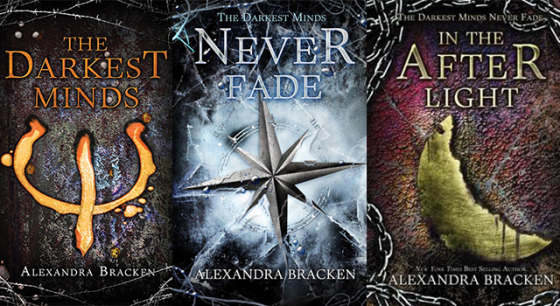 One lucky SciFi Mafia reader will be getting The Darkest Minds trilogy from author Alexandra Bracken plus a Visa gift card (see below for details)! This is especially fun because the third and final installment, (The Darkest Minds Never Fade) In the Afterlight, hasn’t been released yet. So our winner will be one of the first to get his or her lucky hands on the final book.

Check out the details below the complete prize description and rules, then stay all the way to the end of the post to learn more about the books and author, if you’re not familiar with her work. Good luck!

The Prize:
One (1) winner will receive a complete set of The Darkest Minds series, plus a $25 Visa gift card for forging their own destiny!

Limit one (1) entry per person and per email address for the duration of the Entry Period. Multiple entries received from any person or e-mail address will be void. Entries generated by script, macro or other automated means or which subvert the entry process are void. Entries will be accepted until 11:59pm EST Monday, September 15th, 2014.

Entry is open to anyone in the US only (13 and older). This contest is void where prohibited by applicable law. Winners may be required to sign an affidavit of eligibility as a condition to the delivery of the applicable prize. Employees and their immediate families/household members of scifimafia.com and their respective parent companies, affiliates, and subsidiaries are not eligible to enter the sweepstakes.

No purchase necessary. To enter, submit all required information listed under “How To Enter” above. All entries must include the entrant’s name, a valid email address and shipping address (no P.O. Boxes) for any potential prize shipments. The first and last name provided by online entrants will be the identity of the entrant and, if selected for a prize, the identity of the winner(s). We reserve the right to disqualify any entries that we believe in good faith have been generated by a so-called spam or automated e-mail program or via scripts and automated submission. By participating, all entrants agree to abide by these rules.

Representatives of SciFiMafia.com will select entrants at random who meet the entry requirements to win the prize(s). In the event of a dispute regarding the identity of the person submitting the entry, the entry will be deemed to be submitted by the person in whose name the email account is registered. The decisions of scifimafia.com are final and binding in all matters relating to this contest/giveaway. Winners will be notified by email and/or telephone, as determined by scifimafia.com or its affiliated contest host and may be publicly announced via scifimafia.com and related properties. If a winner is found to be ineligible, an alternate winner may be selected from the pool of eligible entries. There is a limit of one entry per person per email address. Duplicate entries will be void. All entries become the property of scifimafia.com and will not be returned.

An entrant or winner may be disqualified from the contest/giveaway if he or she fails to comply with each provision of these official rules, as determined at the discretion of SciFiMafia.com.

SciFiMafia.com shall not be liable for: 1. Failed, returned, or misdirected notifications based on inaccurate information provided by the winner on the entry form, 2. Entries, and responses to winner notifications that are lost, late, incomplete, illegible, unintelligible, or otherwise not received by the intended recipient in whole or in part or for computer or technical error of any kind, 3. Any electronic miscommunications or failures, technical hardware or software failures of any kind, lost or unavailable network connections, or failed, incomplete or delayed computer transmissions which may limit an entrant’s ability to participate in the contest, 4. Any technical malfunctions of the telephone network, computer online system, computer equipment, software, program malfunctions, or other failures, delayed computer transactions, or network connections that are human, mechanical, or technical in nature, or any combination thereof, including any injury or damage to entrant’s or any other person’s computer related to or resulting from downloading any part of this contest or 5. Any warranty of fitness or merchantability of any prize or the function or operation thereof, which shall be the sole responsibility of the manufacturer of the prize. Unless prohibited by applicable law, entry constitutes permission to use an entrant’s name, address (city and state) and testimonials in all media, in perpetuity, in any manner SciFiMafia.com deems appropriate for publicity purposes without any further compensation to such entrant.
By entering or accepting a prize in the contest/giveaway, winners agree to be bound by these official rules and to conform to all federal, state, and local laws and regulations. When applicable, the winner will be required to execute and return to SciFiMafia.com within five business days an affidavit of eligibility and a liability and publicity release to be eligible for the prize or an alternate winner will be selected. Winner(s) may be required to furnish proof of identity, address, and birth date in order to receive prize. By entering, an entrant agrees to release and hold harmless SciFiMafia.com, and their parent, subsidiary, and affiliated entities, directors, officers, employees, attorneys, agents, and representatives from any damage, injury, death, loss, claim, action, demand, or other liability (collectively claims) that may arise from their acceptance, possession and/or use of any prize in their participation in this promotion, or from any misuse or malfunction of any prize awarded, regardless of whether such claims, or knowledge of the facts constituting such claims, exist at the time of entry or arise at any time thereafter. Any person attempting to defraud or in any way tamper with this sweepstakes/contest/giveaway will be ineligible for prizes and may be prosecuted to the full extent of the law. SciFimafia.com reserves the right to modify the rules of the contest in any way or at any time. scifimafia.com reserves the right, in their sole discretion, to cancel or suspend this contest should viruses, bugs, or other causes beyond their control corrupt the administration, security, or proper play of the contest. This contest shall be governed by Florida state law. By participating in this contest, entrants agree that Florida courts shall have jurisdiction over any dispute or litigation arising from or relating to this contest, and that venue shall only be in Florida.

ABOUT THE DARKEST MINDS
When Ruby woke up on her tenth birthday, something about her had changed. Something alarming enough to make her parents lock her in the garage and call the police. Something that gets her sent to Thurmond, a brutal government “rehabilitation camp.” She might have survived the mysterious disease that’s killed most of America’s children, but she and the others have emerged with something far worse: frightening abilities they cannot control.

Now sixteen, Ruby is one of the dangerous ones.

When the truth comes out, Ruby barely escapes Thurmond with her life. Now she’s on the run, desperate to find the one safe haven left for kids like her-East River. She joins a group of kids who escaped their own camp. Liam, their brave leader, is falling hard for Ruby. But no matter how much she aches for him, Ruby can’t risk getting close. Not after what happened to her parents.

When they arrive at East River, nothing is as it seems, least of all its mysterious leader. But there are other forces at work, people who will stop at nothing to use Ruby in their fight against the government. Ruby will be faced with a terrible choice, one that may mean giving up her only chance at a life worth living.

ABOUT (THE DARKEST MINDS) NEVER FADE
Ruby never asked for the abilities that almost cost her her life. Now she must call upon them on a daily basis, leading dangerous missions to bring down a corrupt government and breaking into the minds of her enemies. Other kids in the Children’s League call Ruby “Leader”, but she knows what she really is: a monster.

When Ruby is entrusted with an explosive secret, she must embark on her most dangerous mission yet: leaving the Children’s League behind. Crucial information about the disease that killed most of America’s children-and turned Ruby and the others who lived into feared and hated outcasts-has survived every attempt to destroy it. But the truth is only saved in one place: a flashdrive in the hands of Liam Stewart, the boy Ruby once believed was her future-and who now wouldn’t recognize her.

As Ruby sets out across a desperate, lawless country to find Liam-and answers about the catastrophe that has ripped both her life and America apart-she is torn between old friends and the promise she made to serve the League. Ruby will do anything to protect the people she loves. But what if winning the war means losing herself?

ABOUT (THE DARKEST MINDS NEVER FADE) IN THE AFTERLIGHT
Ruby can’t look back. Fractured by an unbearable loss, she and the kids who survived the government’s attack on Los Angeles travel north to regroup. Only Ruby can keep their highly dangerous prisoner in check. But with Clancy Gray, there’s no guarantee you’re fully in control, and everything comes with a price.

When the Children’s League disbands, Ruby rises up as a leader and forms an unlikely allegiance with Liam’s brother, Cole, who has a volatile secret of his own. There are still thousands of other Psi kids suffering in government “rehabilitation camps” all over the country. Freeing them–revealing the governments unspeakable abuses in the process–is the mission Ruby has claimed since her own escape from Thurmond, the worst camp in the country.

But not everyone is supportive of the plan Ruby and Cole craft to free the camps. As tensions rise, competing ideals threaten the mission to uncover the cause of IANN, the disease that killed most of America’s children and left Ruby and others with powers the government will kill to keep contained. With the fate of a generation in their hands, there is no room for error. One wrong move could be the spark that sets the world on fire.

ABOUT THE AUTHOR
Alexandra Bracken was born and raised in Arizona, but moved east to study at the College of William & Mary in Virginia.  She recently relocated to New York City, where she worked in publishing and lives in a charming apartment overflowing with books.  You can visit her online at www.alexandrabracken.com or on Twitter (@alexbracken).