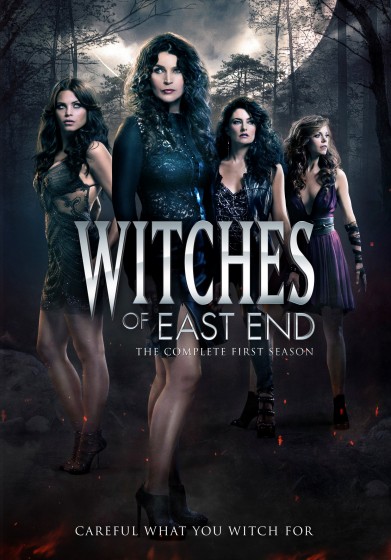 “Witches of East End” stars Emmy award-winning Julia Ormond (Temple Grandin) as Joanna Beauchamp, an ageless mother trying to keep a supernatural secret from her daughters, Freya (Jenna Dewan-Tatum; Step Up) and Ingrid (Rachel Boston; (500) Days of Summer) so they can lead a normal life. But when Joanna’s estranged sister (Mädchen Amick; “Twin Peaks”) arrives to warn her of an evil entity out to destroy them all, Joanna is forced to reveal the truth about her family’s magical legacy. Co-starring Virginia Madsen (Sideways), Eric Winter (“Days of Our Lives”) and Daniel DiTomasso (“Beauty and the Beast”), this powerful and enchanting drama series will cast its spell on you!

This is a great time to be a fan of sci-fi/fantasy/supernatural TV. There is so much available now that we just can’t cover it all here on SciFi Mafia. Lifetime‘s Witches of East End is one of those series that I couldn’t fit in to my coverage or viewing schedule when it first aired last fall. I’d since heard some good things about it, so when the opportunity arose to preview the first season on DVD I decided to give it a try. Honestly, though, I wasn’t expecting much.

Little did I know I’d be discovering my new favorite guilty pleasure.

I know; I’m just as surprised as you are. But it’s addictive. Cozy but not Hallmark Channel. Star-crossed love but not a teenager in sight (no offense, teens, but thank goodness; don’t worry, everyone is still outrageously good looking). Nice witchiness factor that’s an active part of the plot. More than one season-long mystery, plus a few that get resolved along the way. Some unexpected twists. Family love and family drama and some nice incidental humor. It’s doesn’t take itself too seriously, but also doesn’t become ridiculous.

There’s a lot that’s great about the series, but the best is the strength, charm, charisma and chemistry of the entire cast, especially of the four women, and most particularly Julia Ormond and Mädchen Amick. I should have known; I’ve seen and enjoyed both of their work over the years. But they are supremely watchable in these roles. The cast in this show makes all the difference, as it can do and does in many of my favorite shows. In Witches of East End they take what could be eye-rolling in the wrong hands and make it absolutely delicious. Because this show is absolutely delicious.

Witches of East End Season 1 is perfect for summer, or any time you’d like to relax with something fun and entertaining and sexy and mysterious and supernatural. That’s why you need to own it, not just watch it online. This is something you’ll want to throw on the ol’ DVD player or laptop whenever you want a nice little guilty pleasure cozy retreat.

According to the commercials (and I say that with the giant caveat that the trailer above really is not an accurate representation of Season 1), Season 2 will be taking a darker and edgier turn. If that is indeed the case, I have no idea how that will play with this series. A darker and edgier Season 2 has been wonderful so far for Defiance. I would hate to see darker and edgier mean that the cast chemistry is disrupted. But like other shows with such a cast and such a chemistry (I’m thinking Being Human and Haven), I can see it getting even better. Before diving in to Season 2 though, which premieres in about a week, get the Season 1 DVD set and binge-watch like I did. Then you’ll  be prepared for whatever Season 2 has to bring.

The special features are really nothing to get too excited about; the featurette about why you’ll love the show is really just preaching to the choir. The deleted scenes and gag reel are extremely brief. The cat blooper did make me laugh out loud, and I expect will make cat owners laugh even harder, but that’s it for the bonuses.

It doesn’t matter. I just love this DVD set. I love Season 1 of this series. I hope you have as much fun watching it as I did, and as I will when I watch it again and again.

I give Witches of East End – The Complete First Season, Five Out of Five Stars.