DVD Review: Under the Skin 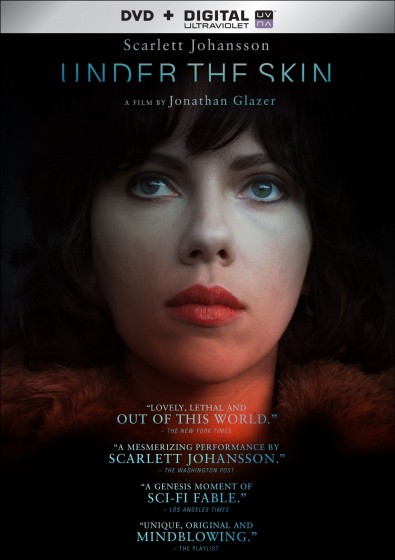 A voluptuous woman of unknown origin (Johansson) combs the highways in search of isolated or forsaken men, luring a succession of lost souls into an otherworldly lair. They are seduced, stripped of their humanity, and never heard from again. Based on the novel by Michel Faber, Under the Skin examines human experience from the perspective of an unforgettable heroine who grows too comfortable in her borrowed skin, until she is abducted into humanity with devastating results.

Ya know, there are definitely levels of artsy movies and Under the Skin is just about too artsy for its own good. There is going to be a love it or hate it response to this movie, but I’m going to actually fall in the middle, because I have equal love and hate.

Let’s start, generously, with what I love.

Scarlett Johansson is an absolute pro. The facial expressions she flips through as she chooses her victims, especially when she decides against someone, is fantastic. And when her alien character goes through some human self discoveries, it’s amazing. It is like she is possessed by this alien rather than playing it.

The final moments of the film are disturbing and visually awesome. The only trouble with the final scene of the movie is making sure you held on to the film to get that far.

And now the hates.

I found the first 50 minutes of the movie physically painful. Quite a statement, I know. Between long scenes of dialogue-less driving and deliberately out of tune screechy violins I had to ask myself if I could even make it through the whole movie. It is all designed to feel alien. I get it. But I found myself irritable and wanting to crawl out of my skin.

Again, I get it, we’re watching an alien predator and those scenes with her victims are uncomfortable and harsh, but it had a very monotonous and disjointed feel that just seemed to trudge on into forever.

With all that, it was imperative to see the special features videos to try and gain some clearer understanding of what the director was trying to accomplish. Here’s what is covered in those featurettes.

So, you can only watch those special features if you’ve already watched the film because they would completely spoil the ending, but they’re completely necessary to watch if the film is to have any redeeming qualities.

Sadly what I really took away from the special features was that all the things that gave me the hates were to give an alien feel to the movie which I understand, but if it makes me want to turn off the movie, then there probably needs to be a better way of making it feel alien without having me feeling like my eyes, ears and brain are being assaulted.

Secondly, it seems that there was a whole lot of fluidity and disorganization to the production without a super clear idea of what was to be accomplished and I think that comes across in a bad way in the final product.

Finally, the obsession with the cameras is neat in creating a way for them to film covertly. Using real life situations and people without them knowing they were being filmed is awesome, but in the final product it’s too much. It’s gone too far creating long shots with little dialogue that seem to serve no purpose.

Under the Skin really could have been awesome. Scarlett Johansson is complete perfection. And frankly, you’re never going to see her more naked than you will in this movie. She is so naked. More than once. Surprisingly, I don’t actually find it gratuitous. She’s a sexual predator in a foreign body. It makes sense for the character. Now, could they have made this same movie with a man? Uh, no. No one would watch it, because it would be so creepy.

Sadly this movie is just a victim of poor production on several different levels, excelling in certain ways and just bombing in others. Scarlett Johansson‘s amazing performance just wasn’t enough to save it. There’s a very specific audience that will love this movie, but I suspect that generally it will be disliked.

Under the Skin is available from Amazon. Here’s a link!