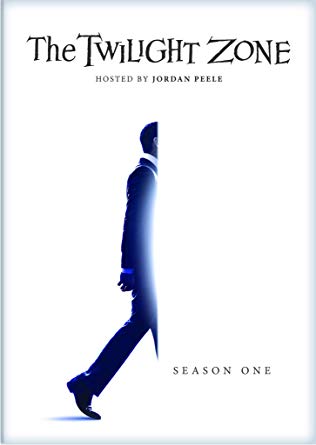 Thanks to CBS Home Entertainment for the review copy of this DVD set.

First, the series. Like many if not most of us, I’m a big fan of the original THE TWILIGHT ZONE. Happily, so are all of the key people involved in the production of the latest iteration of the series, which was created with the support of original-series creator Rod Serling‘s widow and daughter. One of the executive producers of this version of the series said that Jordan Peele‘s “Get Out” was a perfect example of what their vision of this THE TWILIGHT ZONE would be: horror, a psychological thriller, but especially “great storytelling with an obvious social parable in it.” Just like the original series. And one of the writers of this new series said that whenever the writers’ room got stuck on a plot point, they’d ask “WWRSD?” That’s right: what would Rod Serling do? (And how do I know these things? Because I watched the excellent exclusive features in this DVD set. More on that below.)

So, how did the first season of ten episodes measure up to their template? Horror and/or psychological thriller: 10/10. Great storytelling: 9/10 (not even every original episode gets full marks). Obvious social parable: 9/10. Serlingness: 9/10. That last category is somewhat ironic, because the one episode out of ten that wasn’t the highest level of storytelling or social parable is one of those that was sort of based on an original episode. One of the special features revealed that “Nightmare at 30,000 Feet” wasn’t really meant to be an updated version of the original “Nightmare at 20,000 Feet.” Except for the title, the fact that it takes place on a plane, the indication that one person seems deranged but maybe isn’t and had experienced some sort of mental-health issue some time before the flight and has perceived knowledge of danger to the flight . . . It’s a pretty good episode, but the lesson it reportedly is trying to teach is nearly invisible. But truly, every episode is worthy of your time.

The episodes are presented in the order they originally aired on CBS All Access, though as we learn in the special features, that wasn’t the order they were shot. I suppose I understand why they opened with two perhaps less-strong episodes, but wait until you get to the third; it’s exceptionally powerful, the epitome of Serlingness.

Most important, however, is that you wait to watch the last episode of this first season (hooray, yes, there will be a Season 2) until the very end. DON’T MESS THIS UP. WAIT TO WATCH THAT LAST EPISODE. You’ll understand why once you see it.

Once you’ve watched the final episode, you absolutely must watch the two-part main special feature, titled “Crossing Over: Living in the Twilight Zone,”  found on the final disc of the DVD set. The first third or so of Part One is the backstory of the new series, and it isn’t too spoilery if you close your eyes, because clips. But then comes the kicker, the bonus, the thing that makes purchasing this DVD set worth twice the price. It tells you something about the season that you may not know, and it makes you want to watch the entire season all over again. The season for which you’ve already paid your money. The season they can’t take away from you, because you have tangible media that you own, unaffected by the whims of streaming services. It’s the definition of value-added. And that, my friends, is brilliant.

I’d recommend waiting to watch the excellent commentary episodes until after you’ve seen both parts of the “Crossing Over” feature, because there is some reference to that thing and/or maybe a related thing in at least one of them. I usually love commentaries, and these do not disappoint. They, along with any deleted scenes, promos, and any other episode-specific features (not all of which are exclusive to the DVD set), are found when you click on the title of the episode.

Also accompanying each episode is a short (two-ish minutes) featurette titled “Opening the Door to [episode title].” In general, they each spotlight the social commentary that underlies the episode, as explained by an actor, writer, and/or producer. Nine out of ten of them are in no way eye-opening, unless you count the reveal of yet another British actor who has an impeccable American accent. The one featurette that surprised me is the one for “Nightmare at 30,000 Feet,” because I didn’t see the ostensible moral lesson at all. There was a moral lesson; it just wasn’t the one they discuss.

Here’s a list of this set’s special features per the literature:

Along with “Crossing Over” and the audio commentaries, the feature on Rod Serling is highly recommended; there’s a lot about Serling that I didn’t know, and that was integral to his life and his work. The gag reel is quite short, which I suppose shouldn’t be a surprise when there are only ten episodes and they were on an extremely tight shooting schedule. Any more than a teeny bit of inadvertent shenanigans could have been problematic.

Finally–and this should be the tipping point for those of you classic THE TWILIGHT ZONE fans who are still on the fence–yes, they use a skillfully updated opening sequence (there’s pie in this one!), and perhaps most important, they use a just-barely updated music score that includes, relies upon, and does justice to the original theme. As is stated in one of the features, the music “is the most iconic thing about the original series.” Not everyone would argue with that statement.

I give The Twilight Zone: The First Season Five out of Five Stars.