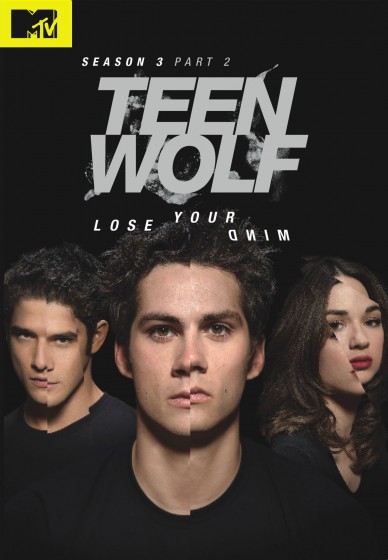 While Scott struggles to find his place as an Alpha, he, Allison and Stiles begin to experience strange side effects as a result of re-igniting the power within Beacon Hills. They soon discover that the answer to their problems may be found in a new student named Kira, a girl with remarkable powers of her own.

I have been a fan of Teen Wolf  since I saw the first released scene at their first Comic-Con panel, nearly a year before the show premiered. I had no interest in the show before I saw that footage. But that was the start of my love for this smart, dark, addicting, unsoapy, snarky, genuine, warm, mysterious, laugh out loud funny, bromance-ful, hair raisingly scary and downright creepy series.

We’ve been through three and a half seasons now up until this DVD set, released just under two weeks before the Season 4 broadcast premiere. Big things happen in Season 3, Part 2. Really big things. Things that, if you don’t know, you need to know before you sit down to watch Season 4 live. If you do know, it’s never a bad idea to get refreshed before the return. That’s the first reason to get this DVD set.

The second reason would be that a series as dense and full of mythology as this one is, is best watched as a marathon. And this second half of the third season is the most complicated, most mythology-dense, and has the most intense performances in the series history.

Sure you could stream it, but with the DVDs there are no connection issues. Plus you get special features with DVDs that you don’t get with streaming. More about that below.

But the third and best reason to get the DVD set is that this is a great show, entertaining and engaging and, as I said, addicting, and you’re going to want to watch it over and over. If you own it, you never need to worry about it going away from a service or site.

Following the Pack: The Fans of Teen Wolf – Over 8 minutes of special footage for the diehard, Teen Wolf Fan directly from the Supernatural Fan Expo with cast interviews, exclusive party coverage and more!

And the tangible bonus feature is this:

As an added incentive, consumers who purchase the Season 3 Part 2 DVD will enjoy a gift with purchase Fan Art Collection booklet, which includes 19 illustrious, fan-produced art pieces inspired by Teen Wolf characters and Season 3 Part 2 events. This booklet is available for a limited time only and includes a Forward by Creator and Executer, Producer, Jeff Davis.

Both bonus features are sweet and are must-haves if you’re amongst the die-hard fangirls and fanboys who like to collect such things. For everyone else… let’s just say that I am once again disappointed to not get one commentary from showrunner and head writer Jeff Davis. There are in fact no commentaries, not even the goofy cast commentaries as they did in the earlier seasons. No “making of,” no deleted scenes, no bonus scenes… Nothing else at all. It is for this reason, and this reason alone, that this set doesn’t get full marks.

Here are the details:

It bears repeating: you need to own every episode of this smart, dark, addicting, unsoapy, snarky, genuine, warm, mysterious, laugh out loud funny, bromance-ful, hair raisingly scary and downright creepy series. Get it. Then watch Season 4 on MTV. Then, probably, you’ll need to own that as well.

I give Teen Wolf, Season 3 Part 2, Four Out of Five Stars.