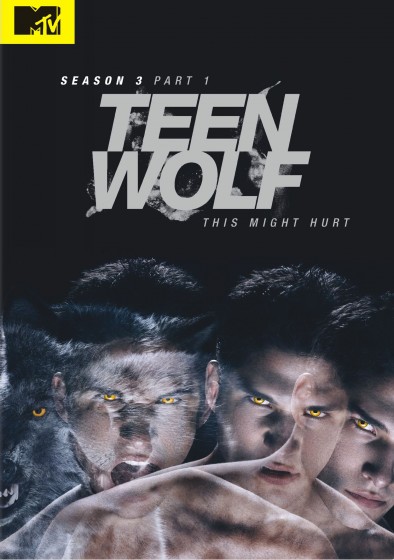 Four months after the events that nearly ended Jackson’s life and resurrected Peter Hale’s, teen wolf Scott McCall and his friends begin their junior year of high school unaware that a new threat has arrived in Beacon Hills: A pack of Alpha werewolves intent on bringing Derek into their fold, while destroying his young pack.

I will start this review out as I start out all reviews related to MTV‘s Teen Wolf (those who are familiar, feel free to join in): The show is nothing like the movie. Beyond a couple of names and the high school setting, seriously, nothing. Just forget the name. Moving on.

Season 3 Part 1 of Teen Wolf is, as all its predecessor seasons have been, cool, scary, funny, sweet, engaging, surprising, intriguing, and rewarding. There are great makeup effects, excellent fight scenes, eye candy galore (everyone is gorgeous, but not in a way that makes you roll your eyes or hate them), interesting mythologies and supernatural creatures, and layered characters that you care about.

Although it isn’t so complicated that you need to take notes while you watch (I’m looking at you, Lostie friends, you know who you are), but it also isn’t the kind of show you just have on “in the background” while you do other things. You’ll be sure to miss some subtle but vital plot point, and you don’t want to do that. It’s too good to miss. The acting, casting, writing, directing, lighting, music, all work together to make up one gem of a series, and I love it.

Each season is almost a limited series in that a new overall mystery/threat is set up and solved/overcome over the span of the season, with payoff in every episode and increasingly large payoffs near the end. Season 3 is basically a double-season order, as MTV has always kept the series at a typical-for-cable shorter season, so the first half that is included in this DVD set is a full story and well worth the price of this “half season”.

If you have never seen this series and would like to jump in before the second half of Season 3 premieres next month, MTV has included a special gift in this set, just for you. So get this series right now, and when you crack it open, do something that I rarely ever suggest. Put on Disc 3 first and go straight to the “Extras” to watch the half hour featurette, “Back to the Pack”. It is a great introduction to the series, with clips and cast interviews that take you through the first two seasons and set you up perfectly for the episodes of this DVD set.

Other extras included in this set are a pretty funny gag reel, a few deleted scenes that would have added to the storylines in a minimal and not crucial but interesting way, and a “Return of the Shirtless Montage” which is, I’m fairly certain, not inclusive of every shirtless moment of the series.

The extra that was not included, and is the only reason the set doesn’t get a Five Out of Five, is commentary. As much as I love the acting in this series, I’ve heard the commentaries with the younger actors and they’re not anything I really need again. No offense. But the showrunner and director commentaries included in previous Teen Wolf sets have been absolutely excellent, and I really miss hearing their insights and behind-the-scenes stories in this set. I expect they were busy shooting the second half of the season, but still. Missed. Since special features are one of the main components that set DVD sets apart from watching online, and since my favorite special feature, creatives commentary, is missing, I just have to bring down the rating by one.

The packaging is standard, and the episodes and special features are listed by disc on the inside of the clamshell case. No slipcover, but that’s okay. The discs themselves each have a cool picture and the disc number, but no episode listing. The onscreen listing is great because it includes descriptions of each of the episodes, always appreciated.

I love, love this series, which has been on my short “A” list from the beginning. My rating for the series, and for this Season 3 Part 1, is Five Out of Five. Because there are no commentaries, and only because of that, this DVD set comes down one star. But if you collect DVDs, if you love this series or if you are new to it, get it. Get it now. Get it before the second half of the season hits the airwaves. Go on.

I give Teen Wolf, Season 3 Part 1, Four Out of Five Stars.