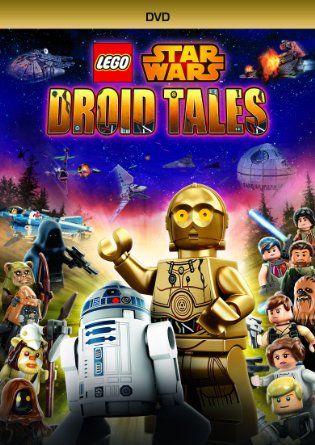 LEGO Star Wars: Droid Tales is a five-part Lego Star Wars television mini-series that premiered on Disney XD on July 6, 2015. It is an animated comedy series depicting the stories and characters from the Star Wars saga.

In the aftermath of Return of the Jedi, the rebels celebrate their victory against the Galactic Empire by having C-3PO and R2-D2 share their previous adventures about the Clone Wars, their work with the Ghost crew from Star Wars Rebels, and their involvement against the Galactic Empire. During this time, C-3PO pursues a mysterious person who has abducted R2-D2. LEGO Star Wars: Droid Tales features the voices of Anthony Daniels, Tom Kane, and Trevor Devall. 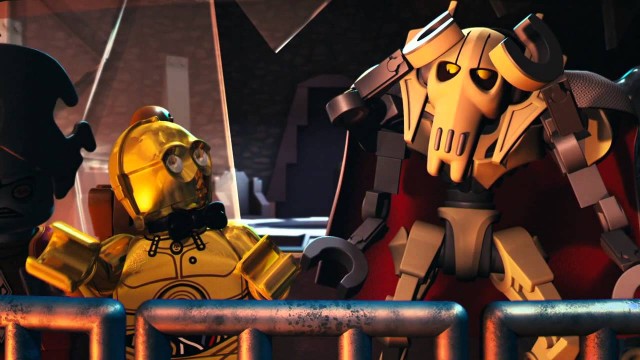 The grand combination of LEGO and Star Wars creates magic once again with LEGO Star Wars: Droid Tales. It combines everything you love about both franchises and spins them at you in a fast-paced CliffsNotes comedy style that remains canon while questioning itself constantly.

This 5-episode miniseries spans the Star Wars franchise from the perspective of C3PO as he recounts events from his creation on. The writing is fast and smart enough to keep an adult entertained while the LEGO physical comedy keeps the kids rolling. The whole adult experience is worth it to hear Anthony Daniels (the voice of C3PO) exclaim in his perfect character accent, “Bless your mechanical hearts!” And my kiddos can’t even handle the tied-up moon-dancing AT-AT.

Moments like the clip below are winners for both young and old. Fans of all ages can appreciate the classic scene with a hilarious twist.

Securing LEGO Star Wars: Droid Tales for my family of fans is a no brainer, but maybe you need more than collector’s style convincing.

For me usually, the make or break (my wallet) moments come in the Special Features. What makes this DVD worth shelling out for a hard copy? What is coming with my purchase that is my gift with the episodes that I can still see in rotation on Disney XD? I must love the content, yes. I must love it enough to watch it again and again (or at least humor my kids watching it over and over). But the the thing that will seal the deal for my purchase is the extras. Special Features on this purchase are nil, zip, nada. This assuming you’re not counting the language set up (I’m not).

The Bonus with LEGO Star Wars: Droid Tales is the three exclusive-to-this-DVD Star Wars trading cards that you get. As a member of a household that has gone ALL IN on the Star Wars Trading Cards, we were excited to add three more cards to our collection. Now collecting any more (by buying more DVDs?) is highly unlikely but it’s a great addition to our collection.

They even give a nod to card collectors in the series by periodically taking a screenshot and showing it in the form of a trading card. Very cute.

So the moral of the story is collectors collect all the things, and LEGO Star Wars: Droid Tales should be on your collection list.

I give LEGO Star Wars: Droid Tales Four out of Five Stars.