Set in Washington, D.C., BrainDead follows young, struggling documentary filmmaker Laurel Healy (Mary Elizabeth Winstead, 10 Cloverfield Lane) as she takes a job working with her brother, Senator Luke Healy (Danny Pino, Cold Case). She soon discovers there’s more to Washington than meets the eye. As tensions grow amongst political parties, so does a conspiracy involving alien bugs replacing the brains of several members of Congress. The investigation unfolds while the infection spreads. Whatever is happening, it’s clear this isn’t politics as usual. 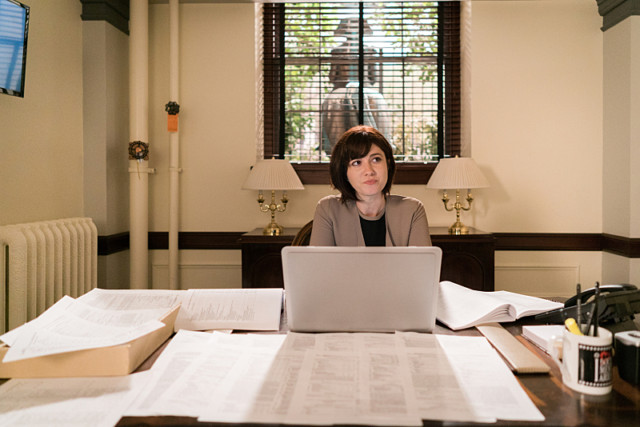 Thanks to CBS Home Entertainment for the review copy of this DVD set. And thank you to CBS, Michelle King, and Robert King for the best laughs I’ve had since the Walterisms of Fringe. Who could have predicted that when the Kings first pitched the 13-episode series, it would air during the summer of what was hopefully, arguably, the most bizarre and absurdist political campaign season in U.S. history? Finally, an explanation for the ridiculous, outrageous insanity that was the presidential campaign of 2016, and really, for U.S politics for the past 20 years or so. If there’s a better explanation than brain-eating alien bugs, I’d like to hear it.

I first learned of BrainDead during the barrage of commercials that aired during the final weeks of the Kings’ The Good Wife, a smart and sometimes political lawyer series that periodically dropped in a dose of sharp wit for a breather from the intensity of the subject of the week. Although I’ve been pretty leery of comedies for seemingly decades, the Kings’ involvement inspired great hopes for this combo-spoof of political machinations and alien invasion. Happily, that hope was rewarded; they’ve simply flipped the formula. Still plenty of intrigue, but this time it’s the drama that gives a breather from the laughs.

Sharply written with equal criticism of both sides of the aisle, the series is in fact a riot. The inclusion of actual news clips from the preceding week in each episode is brilliant, mocking everything that is hated about politics, no matter your stripe. It’s a little bit The West Wing, a little bit The Colbert Report, and a little bit Invasion of the Body Snatchers, with a little bit of Scott Pilgrim vs. the World thrown in for good measure, since Mary Elizabeth Winstead, who plays BrainDead main character Laurel Healy, will always be Ramona Flowers to me. Cool and smart and adorable, just like she is in this series. She is pitch perfect in this role. 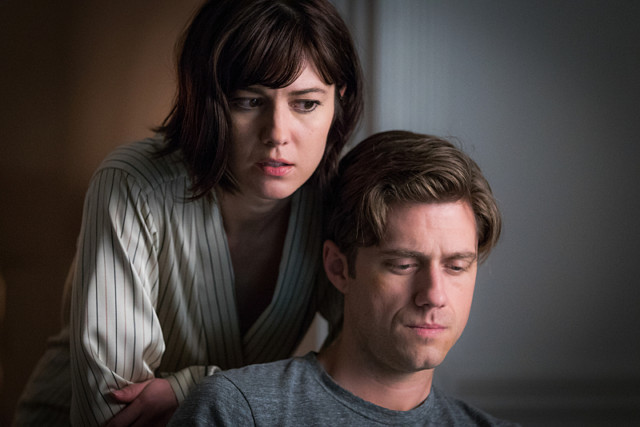 Equally well-cast and absolutely glowing in their roles are Aaron Tveit (pronounced “tuhVEET,” by the way) (Grease Live, Graceland) as a Republican senator’s go-getter legislative assistant Gareth Ritter; Danny Pino (Cold Case) as Laurel’s brother Luke (at least her name’s not Leia), a dynamic Democratic senator; Nikki M. James (The Good Wife) as brilliant scientist Rochelle Daudier; Johnny Ray Gill (True Blood, Rectify) as doggedly determined, well-read conspiracy theorist Gustav Triplett; and Zach Grenier (David Lee in The Good Wife) as retired senator Dean Healy, father of Laurel and Luke. But as much as I love each of the actors, the characterss and their chemistry, it’s Tony Shaloub (Men in Black, Galaxy Quest) who outdoes himself in his portrayal of Senator Red Wheetus; strong, sobbing, flailing, murderous, and freaking ridiculously hilarious.

Fans of The Good Wife will recognize familiar Kings-isms like snappy dialogue, very long episode titles, even longer cold opens (the part of the episode that comes before the title), characters who talk into the camera (not breaking the fourth wall, but as though the audience is the character to whom they’re speaking), and great music by composer David Buckley, who combines the classical sound of The Good Wife with a bit of Danny Elfman’s Men in Black creepiness to hit the right tone for this mashup of genres. TGW fans may also recognize Jonathan Coulton, who wrote and sings the priceless musical “Previously on” recaps at the beginning of each episode, and who made a cameo appearance on the TGW episode that was based upon his real-life legal issue with Glee (look it up, it’s a great read).

Although the Kings were hoping for four seasons of BrainDead, they only got one (subsequent seasons would each be based in a different major city–watch the special features to learn which and why), but don’t worry; this one season will not leave you overhanging any cliff. Its mostly satisfying ending (one of the deleted scenes should have stayed in to make it completely satisfying) is packed and energetic and neatly wrapped up by the final credits. 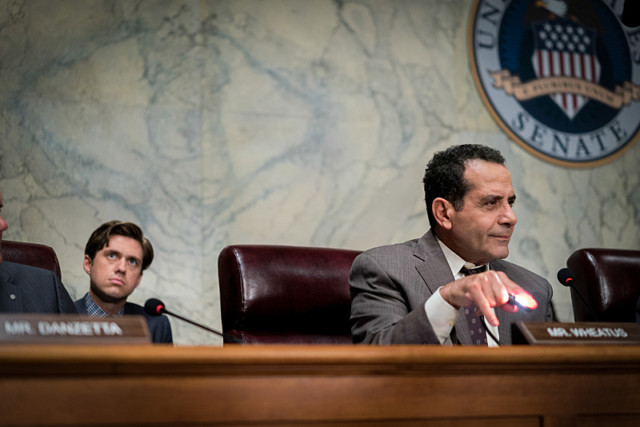 The BrainDead packaging is user-friendly, my favorite kind. I get so irritated when there are no indications either in the case or on the discs as to which episodes are on which discs; with BrainDead you’ll find the listings on both the case and the discs. And whether it’s because this is a 13-episode season or because the people who put together this package are smart, or both, the bonus features are all at the end of the last disc (except for the deleted scenes which are found with 11 of the 13 episodes). Am I the only person who doesn’t want the interruption of bonus features at the end of each disc? I dunno, but they did it right on this set.

Here’s what you get for this set’s special features, per the literature, followed by my comments:

Trickle-Down Invasion: The Story of BrainDead – A behind-the-scenes look with show creators Robert and Michelle King as they discuss the origins of their strange, witty, unnerving sci-fi-satire of Washington politics.

Strange Bedfellows: The Characters of BrainDead – Meet the cast who portray these colorful characters with a playful sense of humor and horror.

The Third Party: The Politics of BrainDead – Learn how the current events in the 2016 election are projected into BrainDead through the cracked prism of an alien invasion.

The featurettes are each about ten minutes long, a nice watchable length, and they aren’t spoilery (or at least not any more spoilery than if you saw the commercials) if you want to check them out before the episodes. My favorite is the third, because it explains how they were able to include actual news broadcasts from the previous week onto the TV screens that show up during the episodes. It also outlines the basis for the second, third, and fourth seasons of the show. I shake my fist with rage that the show wasn’t picked up for those further seasons, but I will cling desperately to the hope that it will be picked up by Showtime or Netflix or some similarly clever platform.

As I mentioned above, the deleted scenes are found when you click on each individual episode, of the 11 episodes that include deleted scenes. Some of the scenes are throwaways, but an unusual number of them would have been great to include in the episodes because they held helpful information or fleshed out a plot point. The gag reel is fun but exceptionally short.

Get this DVD set. Don’t be held hostage by the whims of streaming services or an unreliable wifi; own the series. It’s worth it. Whether you loved, hated, or were simply bewildered by the recent presidential election and/or by American politics in general, the clever absurdity of this series offers a release and a relief. What you do with your feelings after that is up to you.

I give BrainDead: The First Season Five out of Five Stars.

BrainDead: The First Season is available to order from Amazon right now. Here’s the link: