Not only was he in Doctor Who as Solomon in “Dinosaurs on a Spaceship”, but he’s playing the man who played Doctor Who, in tomorrow night’s An Adventure in Space and Time. He was Filch the caretaker in the Harry Potter movies, and presided over one of the most brutal scenes in Game of Thrones as Walder Frey.

The man we know as so many characters in so many great performances, David Bradley, has now been cast in the wildly anticipated FX series from Guillermo del Toro and Carlton Cuse, The Strain. We have the details below, followed by a on-set picture tweet from Cuse last month:

LOS ANGELES, November 21, 2013 – Acclaimed actor David Bradley has been cast in the role of “Professor Abraham Setrakian” in the FX drama series The Strain, from Academy Award® nominated filmmaker Guillermo del Toro, author Chuck Hogan and writer/producer Carlton Cuse, which is based on the best-selling vampire novel trilogy of the same title written by del Toro and Hogan. 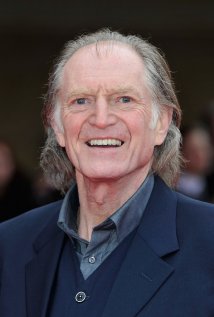 In The Strain, “Setrakian” is a holocaust survivor who immigrated to the United States after World War II and now runs a pawn shop in Spanish Harlem. As the outbreak spreads, he may be the only one with answers – if anyone will listen. This role was previously held by John Hurt, but was recast by the producers and FX Productions.

Bradley’s notable television credits include HBO’s award-winning series Game of Thrones, the BAFTA® Award-winning BBC series Doctor Who, the acclaimed drama Broadchurch, Mount Pleasant, and The Tudors. Bradley was a mainstay in the hugely successful Harry Potter movie franchise in the role of “Argus Finch.” For his work in theater, Bradley was awarded the Laurence Olivier Theater Award for Best Actor in a Supporting Role in 1991 for his performance in King Lear at the Royal National Theatre.

The Strain is a high concept thriller that tells the story of “Dr. Ephraim Goodweather” (Corey Stoll), the head of the Center for Disease Control Canary Team in New York City. He and his team are called upon to investigate a mysterious viral outbreak with hallmarks of an ancient and evil strain of vampirism. As the strain spreads, Eph, his team, and an assembly of everyday New Yorkers, wage war for the fate of humanity itself.

The Strain, which received a series order earlier this week, begins production later this month in Toronto and the series is scheduled to premiere in July of 2014 on FX.

About FX
FX is the flagship general entertainment basic cable channel of FX Networks, a business unit of 21st Century Fox. FX Networks is comprised of FX, FXM, and FXX, its newest channel, which launched in early September 2013. Launched in June of 1994, FX is carried in more than 98 million homes. The diverse schedule features a growing roster of critically acclaimed and award-winning hit dramas series, including Sons of Anarchy, Justified, The Americans and The Bridge; the miniseries American Horror Story: Coven; and the acclaimed hit comedy series Louie, Archer, and Chozen (Jan. 13). The network’s library of acquired box-office hit movies is unmatched by any ad-supported television network. FX’s roster of acquired hit series includes Two and a Half Men, Anger Management and, coming in 2014, Mike & Molly.