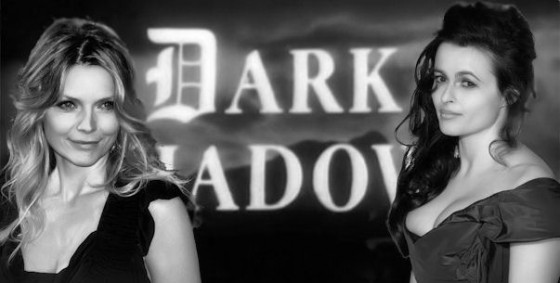 A couple of weeks ago, we told you that that Eva Green (Womb, Camelot) had scored the lead role of Angelique, in director Tim Burton‘s forthcoming film, Dark Shadows. Green will be portraying a witch who has a love-hate relationship with the vampire Barnabas Collins (Johnny Depp).

Now, Deadline reports that Michelle Pfeiffer (New Year’s Eve, Welcome to People) is in negotiations to play Elizabeth Collins Stoddard, the owner of the Collinwood estate where the story takes place. Helena Bonham Carter (Harry Potter and the Deathly Hallows: Part 2) is likely to portray Dr. Julia Hoffman, who specializes in rare blood disorders and moves into the estate. Hoffman is originally perceived as a threat to the vampire Barnabas Collins (Johnny Depp), although she becomes his ally, as Barnabas believes she can cure his blood lust.

Jackie Earle Haley (Human Target, Bolden!), and Bella Heathcote (Beneath Hill 60, Now) are in talks to join the cast as well. Jackie Earle Haley would portray Willie Loomis, a small-time con artist who, upon discovering a portrait of Barnabas Collins (Johnny Depp) wearing several luxurious jewels, decides to break into his coffin and rob him. Instead, he wakes the vampire from his slumber and is enslaved and Bella Heathcoate would play Victoria Winters, the young governess of the Collins estate.

Everybody say it with me “Johnny Depp and Helena Bonham Carter in the same movie together, directed by Tim Burton… that’s shocking!”

A release date for Dark Shadows has yet to be confirmed.