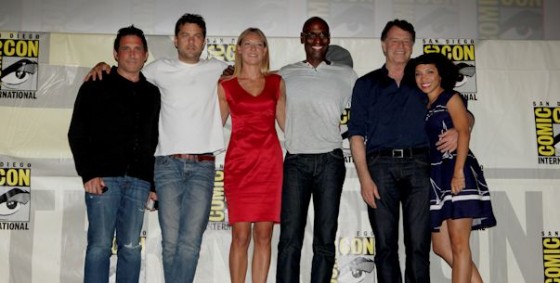 Comic-Con finished with a heart-stoppingly great Hall H TV lineup that started off with our beloved Fringe. Every attendee received a very cool gray Observer fedora, so that most of the audience was looking very natty for this bittersweet panel. Many of us also had a Twitter- and blog-distributed recreation of Walter’s drawing of a white tulip, which we held up for the panel to see, as our fan salute to this amazing show. 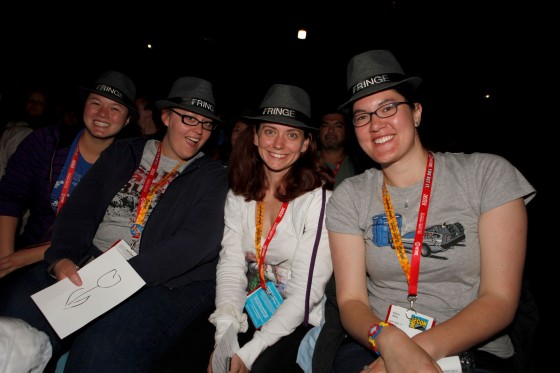 All of the primary cast was there – Anna Torv, Joshua Jackson, John Noble, Lance Reddick, and Jasika Nicole – except for Blair Brown who couldn’t make it. Showrunner J. H. Wyman, who was also on the panel, took a video of the audience saying “we miss you Blair!” With his phone. Like a regular person!

Here’s the video that kicked off the panel:

Yes, you DID see some new footage in there, even though they’re not yet in production. According to Wyman, “this (video) is actually a testament to how much everybody loves the show, that makes the show. Because we had to get the actors who work incredibly long hours to go and shoot some pieces of footage for a season they had no idea what it was about.” The video, in fact, was “our sales tool to get us a Season 5.”

We’ll have more for you from this panel in the days to come, but we just had to get this quote to you right away. It’s from John Noble, in response to a fan question about any possible continuation of Fringe in any format:

I think anything’s possible; that if this final season develops as we think it will, if we finish up very successfully, I would think a film is very possible…

Joshua Jackson followed that up with, “Of course it’ll be shot on this (his phone) by us (the cast)…”

Check back here on SciFi Mafia for more excerpts from this excellent panel in the days to come.