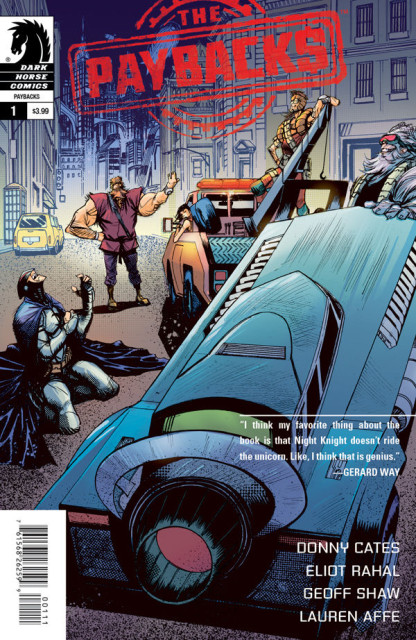 When Watchmen hit shelves in September of 1986, Alan Moore gave us a new version of  the superhero genre that stripped heroes of their unrelatable archetypes and mythic backdrops and set them in a world that was uncomfortably close to our own. It changed our perspective on what the genre could be and has encouraged new creators to tell more self-aware stories with heroes that are less super and more human. Donny Cates and Eliot Rahal continue this tradition in The Paybacks, a superhero-themed black comedy that asks this question: what does it look like when the recession hits the capes and cowls?

The first issue does a good job of setting up the premise of this world, as we follow Alpha Team attempting to collect on the debt of Night Knight, a British aristocrat turned overly-dramatic vigilante that has defaulted on his loan. Their dynamic is a bit glossed over in the first issue, but we get a sense that there is a bit of a familial quality to their team dynamic. Leader Emory Rains emotes a no-nonsense mom figure to Skisquatch and Blood Pouch, who are constantly trying to goad their non-English speaking member, the Soviet Nunchuck, to quote action movie catch phrases, like siblings trying to get their little brother to say dirty words. 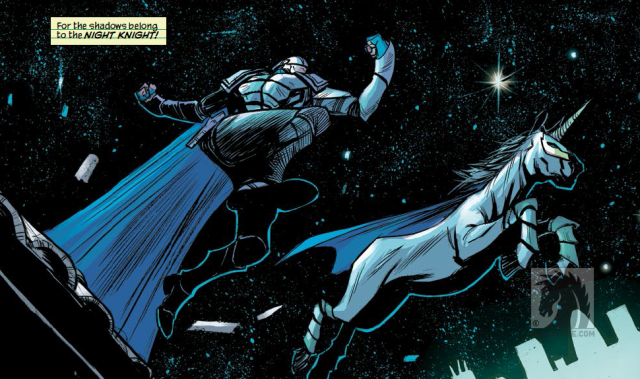 Yep. Night Knight has a Unicorn sidekick that he doesn’t even ride.

Let’s talk about the art, which I absolutely loved. The character designs are well developed. No two characters look like the same person in a different suit. Physical characteristics are diverse and engaging. Shaw’s line work has a rough quality to it that lends itself quite well to the tone and attitude of the story, while Affe’s gorgeous color palette reminds you that we’re still talking about superheroes. The juxtaposition of these two aspects creates engaging panels that have you studying the page long after you’ve finished reading the words. 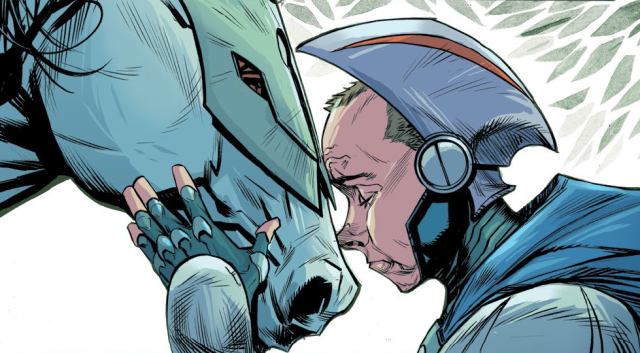 Night Knight bids farewell to his noble sidekick Knight Mare who is NOT a steed.

The story does all the heavy lifting that first issues tend to do. There are a lot of plot points and characterizations coming at you at once. As a result, the writing feels a bit erratic in places, but the overarching tone and theme of the book remain intact, and the art helps interpret some of these concepts where words fail. The notion that superhero-ing is such an expensive endeavor that even a rich man has to take out a loan to get in the game is interesting, and it will be fun to see to see how Night Knight copes with his new “riches to rags” status in upcoming issues. I really want the creators to pull back a little and give all these different moving parts their fair due, because the book has a lot of great things to say, and a fun (and funny) platform.

I give The Paybacks #1 Four out of Five Stars