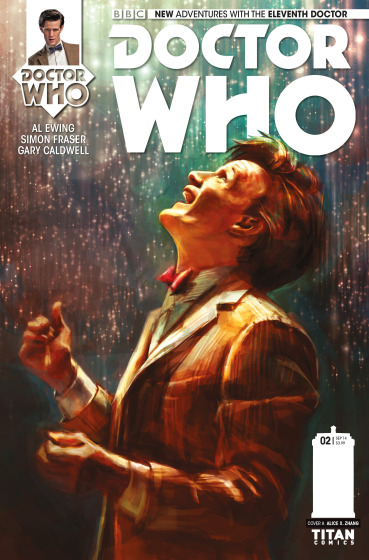 Synopsis:
THE ALL-NEW ADVENTURES OF THE ELEVENTH DOCTOR CONTINUE, AS TERROR STRIKES A RECESSION-HIT PARADISE!

When the Doctor last visited Rokhandi, it was a planet of such stunning natural beauty that an entire solar system had sworn to preserve it. What better place to take new companion Alice Obiefune on her first off-world adventure?

And it would have been a magical vacation… if the TARDIS hadn’t overshot by fifty years. Now the austerity-hit pleasure planet has become a ‘theme safari’ corporate hell, overrun by eerie, giant-headed mascots and a trillion tramping tourist feet!

But there’s something more sinister at play than rampant commercialism and ecological devastation… and the Doctor and Alice need to uncover all of Rokhandi’s long-buried secrets if they’re to escape with their lives!

Writer Al Ewing (Loki: Agent of Asgard) and artist Simon Fraser (Grindhouse) request that you have a nice day, whichever system you’re from. We hope to SERVE YOU again in the future! 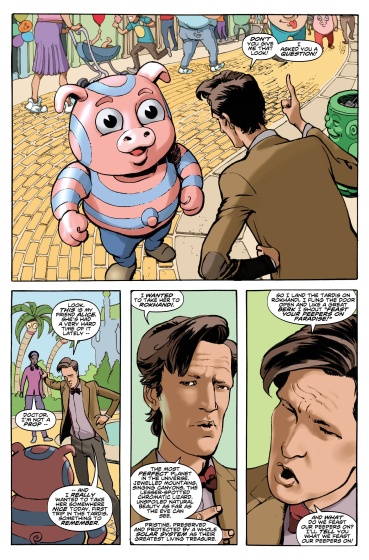 I am really loving Titan‘s Doctor Who: The Eleventh Doctor comics. Al Ewing has really captured the voice of Matt Smith as the Doctor, and the new companion has an interesting backstory. Issue #2 is, like its predecessor, a standalone issue if you want it to be, because it tells a whole story. It’s just better if you read Issue #1 first, to fill out the characters more. Issue #2 also ends with the promise of more to the story, so it’s possible the next one will depend a bit more on the current issue. That’s okay, though, because this issue is a delight. It fills my craving for more Eleventh Doctor, without tainting my memories of those three lovely seasons on TV.

The look of the issue is equally terrific; Matt Smith’s expressions, mannerisms, and periodic gawkiness are easily recognizable.

This is another fun comic, and I wholeheartedly recommend it to all fans of Doctor Who, with particular emphasis for Eleventh Doctor fans.

I give Doctor Who: The Eleventh Doctor #2 Five Out of Five Stars.

Pick up the new Doctor Who comics at your local comic book store, or order from Amazon; here’s the link: