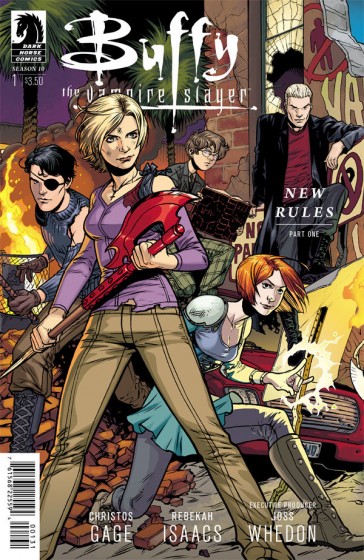 Synopsis: New season. New rules. The age-old battle of Slayer vs. vampire is the focus of Buffy’s life once again—it’s downright nostalgic! But with all the toying with magic she’s done lately, this girl should know it’s time for another game change . . . Shouldn’t she?

Greetings, Scoobies! Season 10 of our favorite vampire slayer launches today and it feels just like old times. Witty banter. Sexual tension. Andrew. In the first panel of the book we are thrust right in the middle of familiar territory: Buffy Summers and her allies stakin’ vamps and taking names in Santa Rosita, California; but even though this feels like Sunnydale 2.0, things are different now. The events of season 9 have fundamentally changed most of the rules and our heroes are scrambling to find their footing in this brave new world. Check out my full review of Buffy the Vampire Slayer: Season 10 #1 after the break.

Writer Christos Gage does an excellent job establishing all the Joss Whedon flair in this book without it getting in the way of telling a good story that is all his own. Buffy’s been through a lot in the past 2 seasons and she’s starting to show the mileage. She’s emotionally mature and focused in a way she hasn’t been in a while. However, in spite of her competence and confidence as a slayer there’s real doubt in her role as a matriarch of her group. She’s plagued by an underlying desperation to keep her Scoobie family alive, and the worry that she will ultimately fail. These moments of deep reflection are juxtaposed with all of the jokes you’d expect from a Buffy story providing a nice balance between the playful and the serious; and the last page holds a surprise that hits you square in the feels leaving you warm and tingly all day long.

Rebekah Isaacs returns for the art on season 10, and I’m glad she did. In my mind, her name has become as synonymous with a Buffy comic as Joss Whedon is with the franchise itself. Isaacs’ art carries its own weight from a storytelling standpoint, and her ability to pace the action from panel to panel really brings the emotional moments home.

All in all this was a well paced story that whets the appetite and leaves you hungry for more. It’s a strong start and I can’t wait to see how the rest of the season unfolds.

Pick up Buffy the Vampire Slayer: Season 10 #1 from your local comic shop today!