Check Out the Animated Eye Candy In New Clips from Season 5 of STAR WARS: THE CLONE WARS 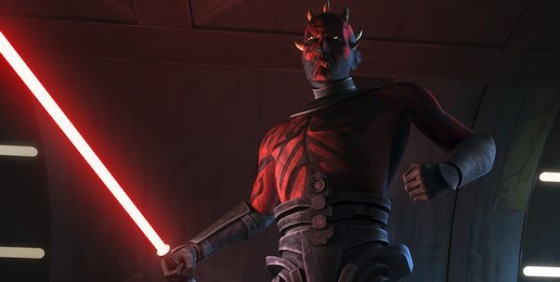 Couldn’t make it to the Star Wars: The Clone Wars panel at Comic-Con this past Saturday, and missed the sneak peeks at what’s to come in the show’s fifth season this fall on Cartoon Network? Don’t worry, the lovely people at Lucasfilm have shared the preview clips with us, and we have them right here for you. They are a great reminder of how gorgeous this series is:

They also released a trailer of the stunning Season 4 box set – if you liked it on TV, imagine it on Blu-ray – oooo!

The box set will be in stores on October 23rd. Here’s the press release:

The Epic Battle Between Good and Evil Continues as Star WarsTM: The Clone WarsTM: The Complete Season Four Arrives on Blu-rayTM and DVD.

SAN FRANCISCO, Calif. (June 28, 2012) – Executive Producer George Lucas and Lucasfilm Animation present Star Wars: The Clone Wars The Complete Season Four, coming to high-definition Blu-ray Disc and DVD on October 23rd. Featuring stunning high-definition animation as well as a host of behind-the-scenes bonus materials, the complete collection explores the untold stories of “a galaxy far, far away” and reveals the magic behind the making of the cutting-edge series.

In its critically acclaimed fourth season, the battle to save the galaxy reaches new heights of peril and new depths of darkness. The valiant Jedi Knights and clone troopers defend exotic planets from enemy forces. They wage war underwater, battle across a night-shrouded world and take on the merciless Death Watch. Our heroes are tested like never before as Anakin is haunted by the realities of his past, Ahsoka fights to free her people, and an undercover Obi-Wan braves a deadly bounty hunter tournament. Season Four culminates with the shocking return of a villain from the past: the ruthless Darth Maul, who will stop at nothing to achieve vengeance.

The epic action and timeless characters of Star Wars surge on in Star Wars: The Clone Wars The Complete Season Four. Bonus materials include a collectible poster and five new video commentaries, which include director, cast and crew interviews. Exclusive to the Blu-ray disc, The Jedi Temple Archives provides in-depth access to an extensive database of creative materials – including early test animations, concept art, 3D turnarounds and more than twenty deleted/extended scenes.

“Season Four allowed us to expand the series on many levels and achieve things that once were impossible,” says Supervising Director Dave Filoni. “It all culminated in the return of one of the most exciting characters from the Star Wars Saga – Darth Maul. To bring a classic character back to life, and know that his future is not yet defined, is really exciting.”

Star Wars: The Clone Wars The Complete Season Four is presented in widescreen with English, Spanish and French 5.1 DTS audio and English, French and Spanish subtitles. Bonus features include:

The Battle of Mon Cala
Dive into the depths of animation production as Supervising Director Dave Filoni and key members of his crew discuss the challenges of creating this complex series of episodes, full of underwater warriors and deep sea action.

Darkened World of Umbara
Supervising Director Dave Filoni and key members of his crew shine a light on the shadowy battlefields of Umbara, discussing the technical hurdles in creating this epic arc, as well as the storytelling challenges of placing Captain Rex and his loyal soldiers in this most difficult of situations.

Obi-Wan Undercover
The truths behind the deception are revealed as Supervising Director Dave Filoni and key members of his crew chat about the creation of this storyline full of betrayal, reversals, and shady underworld figures.

Slaves of Zygerria
Supervising Director Dave Filoni and key members of his crew discuss the development of a story that began life as a comic book before being transformed into an action-packed animated drama.

Darth Maul Returns
Darth Maul is resurrected to become a new menace in The Clone Wars, and Supervising Director Dave Filoni and key members of his cast and crew discuss how this shocking turn of events came to be, and what it took to bring the Sith warrior back to the screen.

Blu-ray Exclusive – The Jedi Temple Archives
o An extensive database exploring special effects footage, early concept art, 3D character and object turnarounds, early animation and more than 20 deleted/extended scenes. The Archives is a rare look at the assets in various stages of creation for The Clone Wars, with a wealth of surprises and never-before seen moments sprinkled throughout

Synopsis
Critically-acclaimed and unlike any other animated show on television, Star Wars: The Clone Wars brings viewers right up to the front-lines of the massive galactic conflict, revealing the stories that forged the Star Wars galaxy.

Lucasfilm, Star Wars™: The Clone Wars™, Lucasfilm Animation and related character names, vehicle names and properties are trademarks and/or copyrights, in the United States and other countries, of Lucasfilm Ltd. and/or its affiliates. TM & © 2012 Lucasfilm Ltd. All rights reserved. All other trademarks and trade names are properties of their respective owners.