Happy Lost Day, you all everybody! I had no idea, ten years ago tonight, that I would be watching the premiere of what I believe is the best pilot ever in television history, of the best series in television history. I know that Lost isn’t everyone’s favorite,  but there is no question that it’s mine.

Beyond all that I loved about the show itself, I love the community that was built by all involved in the show and all the fans; it was one of the first series-based online fan international mega-communities, and it continues to this day. Over this past weekend, more than 270 fans from 15 countries got together on The Island (of Oahu, where the series was filmed) to celebrate the anniversary. Check out the pictures and tweets by following #2014LOST.

One of the best representations of this community is the charity Cancer Gets LOST, which was formed a few years ago by popular Lost blogger Jo Garfein (@JOpinionated) and Lostie Jared Wong (@AgentBacardi). CGL has held some very successful fundraising events, and is holding one right now that will knock the socks off of not only Losties, but fans of Once Upon a Time, The Walking Dead, The Strain, Breaking Bad, and more.

In conjunction with Blacksparrow Auctions, CGL has put together the Cancer Gets LOST 2014 Charity Auction, an online auction of props and other Lost-related items, as well as some amazing items from other shows, many of which are autographed by cast and/or production members. Here’s the lowdown from the Blacksparrow CGL auction site:

We have to go back! Indeed, we are thrilled to be working with our Cancer Gets Lost friends to bring about this special auction event featuring original props, costumes, autographs and other memorabilia from the television phenomenon that is LOST. Proceeds will benefit the American Cancer Society. In addition to LOST, there will be memorabilia from other popular shows. A wide range of current and recent hits will be represented, including Alcatraz, Alias, American Horror Story, Animaniacs, Arrow, Bates Motel, Breaking Bad, Community, Dexter, Dr. Who, Felicity, The Following, Fringe, Game of Thrones, Ghostbusters, Heroes, The Hunger Games, Intelligence, The Leftovers, Once Upon a Time, Orange is the New Black, Orphan Black, Pretty Little Liars, Revolution, Scandal, The Simpsons, Star Trek, The Strain, Super 8, Survivor, The Voice, The Walking Dead and Young & Hungry. It’s quite a line-up.

No kidding. Lost items up for bid include parts of the fuselage wreckage, screen-used Oceanic Airlines water bottles, prop polar bear bones (remember when Charlotte found those in Tunisia?), golf balls, Virgin Mary statues and more. They also have a copy of the iconic Des and Penny photo, freshly autographed by Des himself, Henry Ian Cusick. Damon Lindelof signed some The Leftovers items, Nestor Carbonell (Lost‘s Richard Alpert) signed something from Bates Motel, and – well, look: 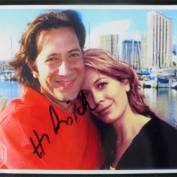 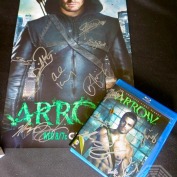 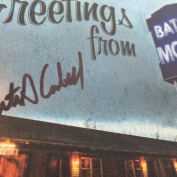 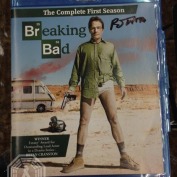 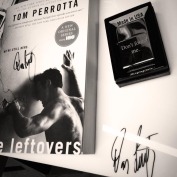 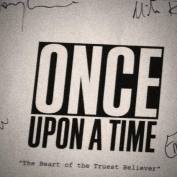 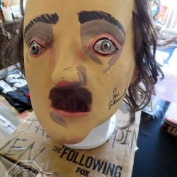 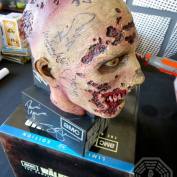 The auction is open right now, and closes on Saturday at 11am Pacific (UTC-8). Don’t miss out on this excellent opportunity to celebrate Lost and so many other great shows, knowing that you are helping a great charity.

On this ten year anniversary, my personal thanks to Damon Lindelof, J.J. Abrams, Carlton Cuse, and everyone involved in the production of Lost, 121 of the most amazing hours of television ever. And thanks to all of the amazing Lost community from around the world, some whom I’ve met, many whom I’ve yet to meet. Lost brought me to the online world and changed the course of my life and that of hundreds and thousands of others (Others?), maybe more. Namaste, my friends.