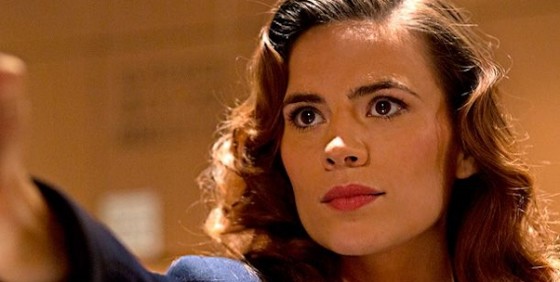 If you own the Blu-ray or DVD of the very excellent The Avengers, you’ve seen the “Marvel One Shot” video about S.H.I.E.L.D. agents entitled “Item 47” that was a bonus feature on the set. That bonus feature may have lead to Marvel’s Agents of S.H.I.E.L.D., which premieres on ABC next Tuesday.

Whether or not it did, I am SO HOPING that what Deadline is reporting is true, that consideration is being given to turning the latest “Marvel One Shot”, included in the Iron Man 3 Blu-ray and DVD, into a series. That one shot was about Agent Peggy Carter, whom you may recall was Captain America’s love interest in the 2011’s Captain America: The First Avenger.

Agent Carter in the One Shot is played by the same woman who played her in the movie, Hayley Atwell. It is unknown whether the same actor would play the part in any series, as those behind the potential production are reportedly only in the process of securing a writer.

Here’s a clip from the One Shot:


A strong female lead, who kicks butt. With a British accent. From the 1940s. YES. YES PLEASE. PLEASE, ABC, PLEASE.

The “Agent Carter” Marvel One Shot will be released with the Iron Man 3 Blu-ray and DVD on Tuesday, no coincidentally the date for the premiere of Marvel’s Agents of S.H.I.E.L.D, at 8/7c on ABC.