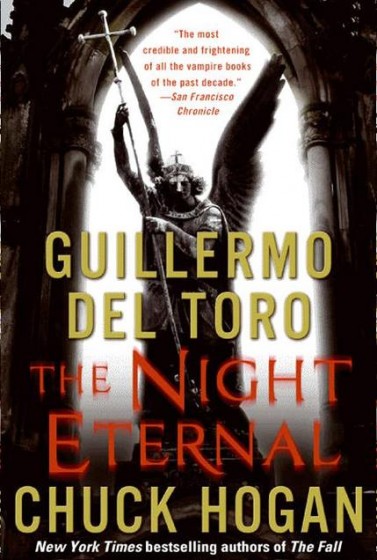 Synopsis: From the authors of the instant New York Times bestsellers The Strain and The Fall comes the final volume in one of the most electrifying thriller series in years

It’s been two years since the vampiric virus was unleashed in The Strain, and the entire world now lies on the brink of annihilation. There is only night as nuclear winter blankets the land, the sun filtering through the poisoned atmosphere for two hours each day—the perfect environment for the propagation of vampires.

There has been a mass extermination of humans, the best and the brightest, the wealthy and the influential, orchestrated by the Master—an ancient vampire possessed of unparalleled powers—who selects survivors based on compliance. Those humans who remain are entirely subjugated, interred in camps, and separated by status: those who breed more humans, and those who are bled for the sustenance of the Master’s vast army.

The future of humankind lies in the hands of a ragtag band of freedom fighters—Dr. Eph Goodweather, former head of the Centers for Disease Control’s biological threats team; Dr. Nora Martinez, a fellow doctor with a talent for dispatching the undead; Vasiliy Fet, the colorful Russian exterminator; and Mr. Quinlan, the half-breed offspring of the Master who is bent on revenge. It’s their job to rescue Eph’s son, Zack, and overturn this devastating new world order. But good and evil are malleable terms now, and the Master is most skilled at preying on the weaknesses of humans.

Now, at this critical hour, there is evidence of a traitor in their midst. . . . And only one man holds the answer to the Master’s demise, but is he one who can be trusted with the fate of the world? And who among them will pay the ultimate sacrifice—so that others may be saved?

When we last left our heroes in The Fall the Master’s plan to subjugate humanity had all but succeeded. With the help of a few turncoats, the vampires successfully rounded up humanity into concentration camps to be harvested like crops for the undead’s hellish appetites. To make matters worse Ephraim Goodweather and his resistance had been dealt two terrible blows: first the death of the vampire hunter Abraham Setrakian at the hands of the Master, and the loss of Ephraim’s son Zachary who had fallen into the hands of the Master.

The Night Eternal opens to a grim new world, and the last two years have not been kind to our rebellious friends. Goodweather isn’t the reliable, clear headed leader he once was. He’s been through a lot and destructive coping mechanisms have left him a wasted shadow of his former self and driven a wedge between him and his friends. But where Ephriam has fallen, Vasily Fett, the rat catcher turned vampire slayer, has risen to the occasion. I liked this role reversal. I always liked Fett’s quiet nobility character the best, and it was nice to see him take center stage. The change in management doesn’t go unaddressed, but it doesn’t devolve into petty drama either. The tension between Eph and his group is palpable, but the writers never let themselves get mired in unnecessary confrontations between their characters.

The book deals heavily in the origins of vampire lore, mixing mystics with the science that Del Toro and Hogan have given readers thus far. The change in direction worked for me; the science behind how vampirism works was very well thought out, but it didn’t explain its origins. This may put some readers off, it worked for me, and aids in the transition toward the novel’s conclusion.

In spite of being very grim and slightly depressing, The Night Eternal ends well, though it leaves the reader a little shell-shocked. This reaction is only appropriate, since this is the end of the world as we know it.

I give The Night Eternal Four out of Five Stars.