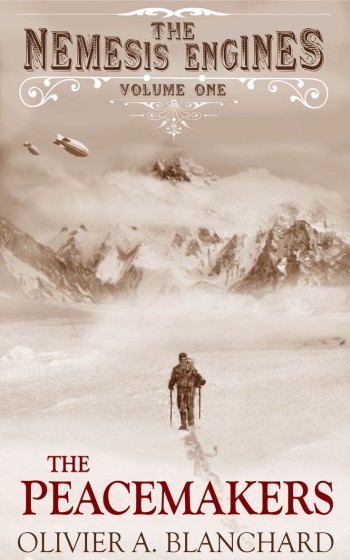 Synopsis:
1915 – While all eyes are on Europe’s battlefields, scientists, anti-war industrialists and financiers all around the world are vanishing without a trace, and rumors of a plot to provide Germany with devastating new weapons have forced Britain’s intelligence services into a frantic, desperate race to hunt down and stop a new faceless enemy.

Thrust together by fate and pursued half way around the world by ruthless killers, four unlikely allies will risk everything to keep these mysterious new machines of war from falling into the wrong hands: Gustav Steiner, the visionary industrialist determined to stay one step ahead of an assassin’s bullet; Alexandra Meade, the haunted young woman desperate to escape her gilded cage; Harbert Pencroft, the idealistic young American aviator on a mission to save the woman he loves; and Archie Whitfield, the lethal British agent, betrayed and left for dead, now driven by a relentless thirst for revenge.

An homage to the novels of Jules Verne and H.G. Wells, The Peacemakers is the first volume in The Nemesis Engines series, which weaves epic adventure, historical fiction, science-fiction and a dash of steampunk into a spell-binding, one-of-a-kind, deeply human roller-coaster ride that promises to keep readers on the edge of their seats.

The author, Olivier Blanchard, of The Nemesis Engines Volume 1: The Peacemakers would probably be both thrilled and appalled to know that this is honestly my very first steampunk novel, and that I actually haven’t read Jules Verne. *gasp* I know. I’ll remedy that as soon as I get through this gigantic pile of amazing novels I have waiting to be read for review. The struggle is real, y’all.

I was fortunate enough to have this book recommended to me by a Facebook friend (hey Stacey!) and I gladly took the plunge, having one of my first encounters with reading historical fact mingling with the awesome fictitious invention that so motivates the steampunk fandom. Now I can see what all the fuss is about.

This book follows Harbert Pencroft, who journeys from his home in America to tend to family business in Haiti. While there, a very dramatic set of circumstances catapults him off on an adventure that lands him love, friendship, money and a very interesting new job spanning different countries and landscapes.

The book takes its dives into courting conversations and personal introspection on behalf of the main character, but balances it with shootouts and other great action sequences that I won’t spoil for you.

I went into this book pretty blind, which is how I like it, and I like to be able to recommend a book and do so in a way that lets you go in pretty blind as well. It is important to note that The Nemesis Engines Volume 1: The Peacemakers is the first of a trilogy with the second installment coming soon (though NOT SOON ENOUGH BEING AS IT ISN’T TOMORROW). It is presently only available in Kindle version (link below). And airships. I’ll just leave that there, shall I?

I give The Nemesis Engines Volume 1: The Peacemakers Five Out of Five Stars.

The Nemesis Engines Volume 1: The Peacemakers is available from Amazon! Here’s a link!