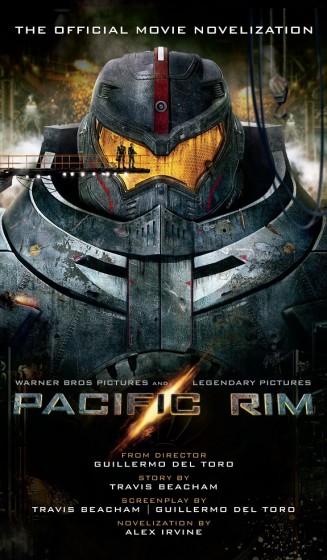 When legions of monstrous creatures, known as Kaiju, started rising from the sea, a war began that would take millions of lives and consume humanity’s resources for years on end. To combat the giant Kaiju, a special type of weapon was devised: massive robots, called Jaegers, which are controlled simultaneously by two pilots whose minds are locked in a neural bridge. But even the Jaegers are proving nearly defenseless in the face of the relentless Kaiju.

On the verge of defeat, the forces defending mankind have no choice but to turn to two unlikely heroes-a washed up former pilot (Charlie Hunnam) and an untested trainee (Rinko Kikuchi)-who are teamed to drive a legendary but seemingly obsolete Jaeger from the past. Together, they stand as mankind’s last hope against the mounting apocalypse.

“I wanted to make not a war movie, but an adventure movie, with a huge, romantic sense of adventure, a sense of grandeur, and operatic battles…” – Guillermo Del Toro

The only other movie novelization I’ve read was for Man of Steel and I read it after I saw the movie. This time I vowed to finish Pacific Rim: The Official Movie Novelization before I saw the movie and I did. I prefer that method so much more than book after movie, especially in the form of a novelization where very little is extra or missing from the book.

There is a great risk of me spoiling the movie which you’re more likely to see than read the book, but if you have the inclination and can wait a few days, I really enjoyed the book and feel that reading it enhances my excitement for the movie.

I’ve been keeping up with all of the trailers, TV spots and featurettes for Pacific Rim and I’m happy to report that only a fraction of the story is in those promotional videos, and for those of you who think that maybe we’ve seen all the special effects there are to be seen in the trailers, there is much more to come. The movie premieres July 12th. Here’s the latest TV spot.


Honestly, the book is just as cool as these promos look. The way the novel is written gives me the impression of someone narrating what they’re seeing on the screen who has personal insight into the characters. All the narration you’ve come to know and love (TODAY, WE ARE CANCELLING THE APOCALYPSE) is waiting for you in the pages.

It’s a fast read and what I would typically call a beach read (though I’ve never had the time to read a book on the beach). It’s a fun, high-energy, fast-paced, non-committal read that will get you excited for the special effects promised in this summer blockbuster.

I give Pacific Rim: The Official Movie Novelization Five Out of Five Stars.

Pacific Rim: The Official Movie Novelization is available from Amazon for pre-order and will be available for purchase July 16th. Here’s a link!