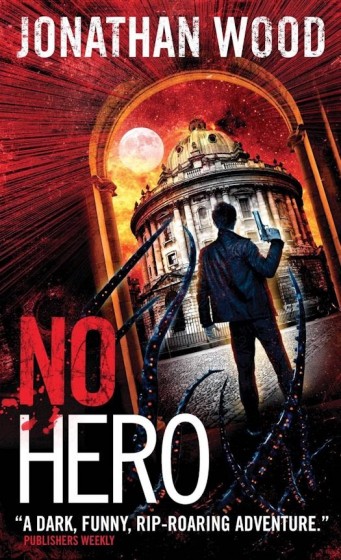 Synopsis:
Barnes and Noble listed No Hero as one of the 20 best paranormal fantasy novels of the last decade – now available in mass market paperback!

“What would Kurt Russell do?”

Oxford police detective Arthur Wallace asks himself that question a lot. Because Arthur is no hero. He’s a good cop, but prefers that action and heroics remain on the screen, safely performed by professionals.

But then, secretive government agency MI12 comes calling, hoping to recruit Arthur in their struggle against the tentacled horrors from another dimension known as the Progeny.

But Arthur is NO HERO! Can an everyman stand against sanity-ripping cosmic horrors?

Any book that requires a prerequisite knowledge of Kurt Russell movies from the 1980’s is ok by me, and ok by my husband who I insisted rewatch Tango and Cash and Big Trouble in Little China with me to refresh my memory.

Except that the hero of No Hero is anything but Kurt Russell. He’s the perfect, bumbling anti-hero who lends himself really well to going from local detective to government man in black alien task force. The lead character, Arthur, has to lean heavily on his “What would Kurt Russell do?” mantra to get him through and out of his adventures alive.

At the start of the book Arthur comes to the disturbing realization that not only are there aliens among us, but there are (as we’ve so often feared) aliens among us who wish to do us harm. A harm that even requires they use our bodies as their own personal parasitic vessels. A process that can occur much like catching a virus if you’re too close to someone already infected. My worst nightmare. Well, one of them.

He has to join a bare bones task force with people of various supernatural talents, and like so many other stories, the communication between team members is supremely faulty. Though many of my favorite TV shows, books and movies wouldn’t exist if the characters had been open and honest from chapter one.

You see, No Hero isn’t going win any major awards for originality, but it is still a rocking fun and fast read. The sci-fi twists are entertaining are are only slightly outshined by the comedy of the writing. Perfect summer read to add to your list!

I give No Hero Five Out of Five Stars.