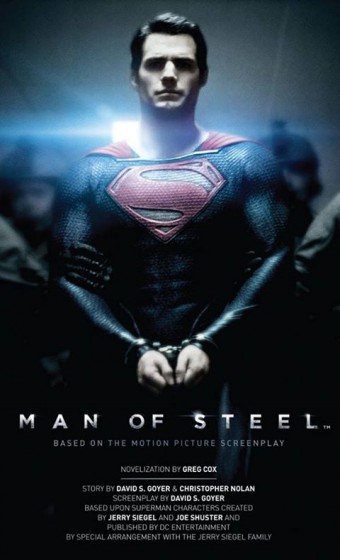 Rounding out the cast are Harry Lennix as U.S. military man General Swanwick, as well as Christopher Meloni as Colonel Hardy.

Man of Steel is being produced by Charles Roven, Christopher Nolan, Emma Thomas and Deborah Snyder. The screenplay was written by David S. Goyer, from a story by Goyer and Nolan, based upon characters appearing in comic books published by DC Comics. Superman created by Jerry Siegel and Joe Shuster. Thomas Tull and Lloyd Phillips are serving as executive producers.

Man of Steel: The Official Movie Novelization is my first experience with a novelization of a movie. Only once have I read a book after seeing the movie and it was Jurassic Park which was still intended to be a book before it was a movie, while this is completely different in that it is the exact recounting of the movie.

It is just that, an exact recounting of the movie. So if you’re looking for additional information to be explained in areas that weren’t covered in the movie then you’ll be disappointed. If you’re looking for a slightly better insight into the characters thoughts and motivations then you will be more than happy with the experience. This is all assuming that you’ve seen the movie.

I’m not sure which I would even recommend you do first. Having seen the movie it was really easy for me to visualize the book in its exact recounting, but I can see why someone would want to read it first. Maybe to get their own mental image of what their reading, but I suppose I don’t really see the benefit since it’s pretty much a straight up recount.

I suppose I recommended seeing the film and then grabbing a copy of the book to enjoy on a car ride or poolside. It’s a well written easy read that serves to take you further into the inner narrative of the characters rather than expand on the movie plot.

I give Man of Steel: The Official Movie Novelization Four Out of Five Stars.

Man of Steel: The Official Movie Novelization is available now from Amazon! Here’s a link!