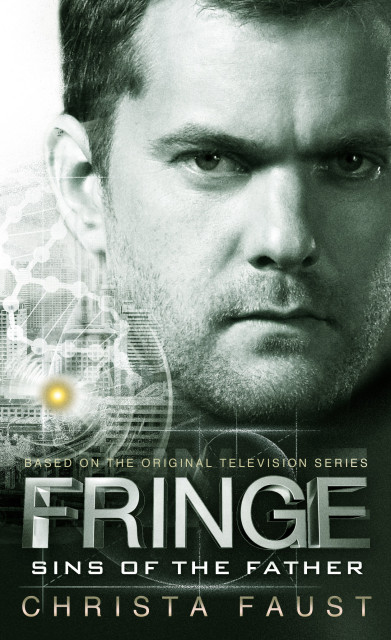 Synopsis:
Never-before-revealed secrets of the characters, leading to the creation of the government’s covert Fringe Division.

In 2008, Peter Bishop is estranged from his father and running shady operations in Southeast Asia. His latest scam lands him in a life-or-death situation involving weird events beyond the ken of modern science. On the run, he finds himself pursued by strange specters of his past… and his future.

The Fringe Division is summoned when the unimaginable occurs. Armed with experimental technology, special agent Olivia Dunham, “fringe” scientist Walter Bishop, and his son Peter Bishop investigate cases that lie beyond the realm of possibility.

While Fringe: The Sins of the Father is probably better enjoyed if you’ve watched the TV series Fringe, it most certainly doesn’t require it. It takes place years before Peter Bishop joins up with Olivia Dunham and his father Water Bishop in The Fringe Division.

Another thing to preface the actual book review is to note that this book, along with the other two books in the trilogy, have no interconnectedness other than the characters and the world they inhabit. The storylines don’t intersect and therefore could be read in any order. So if you haven’t read the previous two books, you would have no issue picking up Fringe: The Sins of the Father and enjoying it on its own.

Fringe: The Sins of the Father is what I lovingly refer to as a beach book. Or a road trip book. This is a book that can easily be devoured in a weekend. It’s extremely fast-paced (like car-chase style) and is easily set down and picked back up. It’s not so deep that it requires complete silence to be read, and is peppered with enough show-loving Easter eggs that it will keep fans of the show happy while not being so obtuse as to confuse someone who’s never watched the show.

Peter Bishop was into some shady business before he aligned himself with The Fringe Division and this book goes into one of those extended globe trotting adventures with just a glimpse at the supernatural that will later rule more of his life.

It’s a great book, and a fun book, and it was nice to be in the world of Fringe again, if just for the weekend.

I give Fringe: The Sins of the Father Five Out of Five Stars.

Fringe: The Sins of the Father is available from Amazon! Here’s a link!