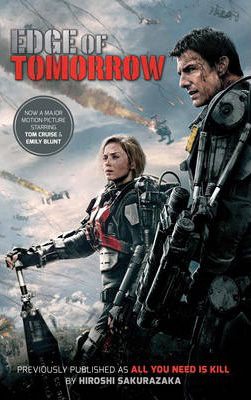 Previously Published As: All You Need Is Kill

Synopsis:
When the alien Mimics invade, Keiji Kiriya is just one of many recruits shoved into a suit of battle armor called a Jacket and sent out to kill. Keiji dies on the battlefield, only to be reborn each morning to fight and die again and again. On his 158th iteration, he gets a message from a mysterious ally–the female soldier known as the Full Metal Bitch. Is she the key to Keiji’s escape or his final death? Now a major motion picture starring Tom Cruise!

Previously published and available digitally as All You Need Is Kill.

Edge of Tomorrow, while it may look like the movie novelization coming just in time for the new Tom Cruise film June 6th, is a book previously published in 2009 with a new cover to reflect the movie.

I am really the worst when it comes to judging a book by its cover and I think in this case it’s really extra important to address the cover, and even title, of this book. The book was titled, All You Need Is Kill, but has been rebranded, Edge of Tomorrow, to go with the movie. Also, as you can see, the picture on the cover, featuring Tom Cruise and Emily Blunt, is from the movie.

I’ve had the pleasure of viewing and writing up everything that’s been released from trailers to interviews for the Edge of Tomorrow movie, and I can confidently say that the book and the movie are very different. For example, the book is set in Japan and surrounds main character Keiji Kiriya, and clearly Tom Cruise‘s character Bill Cage is the Americanized version of that. Good news is that if you’ve got Emily Blunt pictured as Rita Vrataski in your mind when you read Edge of Tomorrow, she pretty much fits the character.

The book is divided into halves, following Keiji Kiriya first, and then backing up and following Rita Vrataski, uniting them in time for the end. There are several plot differences involving training that you can differentiate from reading the book and watching the featurettes from the movie but the best part of all that is that I genuinely don’t know if the outcome from the book will be the eventual outcome from the movie. For me that’s a good thing.

I already love what they’ve done with what I’ve seen in the movie, and the book was an excellent experience, being so different from what I had already seen. I’m glad I got to have a taste of what inspired the movie, and cannot wait to see Edge of Tomorrow in theaters.

I give Edge of Tomorrow Five Out of Five Stars.