Book Review: All You Need Is Kill 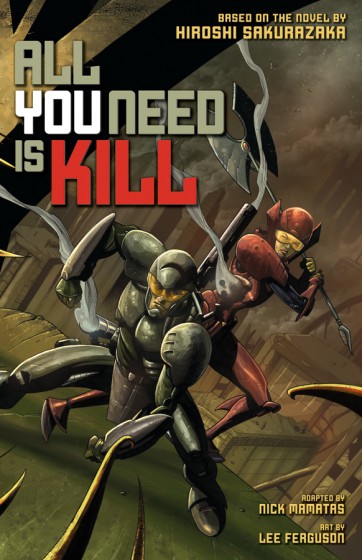 Synopsis:
When the alien Mimics invade, Keiji Kiriya is just one of many recruits shoved into a suit of battle armor called a Jacket and sent out to kill. Keiji dies on the battlefield, only to be reborn each morning to fight and die again and again. On his 158th iteration, he gets a message from a mysterious ally–the female soldier known as the Full Metal Bitch. Is she the key to Keiji’s escape or his final death? Now a major motion picture starring Tom Cruise!

The review of this graphic novel, All You Need Is Kill, goes hand in hand with the review of the Edge of Tomorrow novel. And not in a good way. Well, not if you read it first.

In fact, the story gets so watered-down/Cliff-Noted that I actually think it’s important to warn you not to read All You Need Is Kill before you read Edge of Tomorrow. It would have been better if the author and publisher had found a way to release them as one volume, because the artwork in the graphic novel would have been a great companion served intermittently while reading the story in the novel.

What story did manage to make it into the comic panels felt almost like reading bullet points. Which is a shame because the actual artwork, as opposed to the cover released on the Edge of Tomorrow novel, actually fits the story so much better.

Not to say that it isn’t good. It’s just that I strongly suggest that it be read after Edge of Tomorrow. I can’t vouch for if it will be fine after the movie, but I’ll update this post after I’ve seen it.

I give All You Need Is Kill Three Out of Five Stars purely for the fact that the really great story isn’t given its due in the panels of this graphic novel. I understand that not everything from a novel can fit, but more could have been done in the adaptation, or I would have preferred that the art had been included in the novel itself in its re-release.