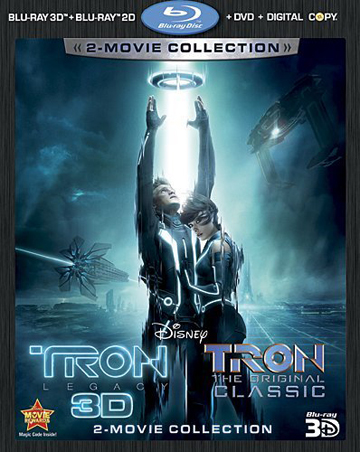 TRON – When a brilliant video game maker named Flynn (Jeff Bridges) hacks the mainframe of his ex-employer, he is beamed inside an astonishing digital world and becomes part of the very game he is designing.

TRON: Legacy – Sam Flynn (Hedlund), a rebellious 27-year-old, is haunted by the mysterious disappearance of his father Kevin Flynn (Bridges), a man once known as the world’s leading video-game developer. When Sam investigates a strange signal sent from the old Flynn’s Arcade — a signal that could only come from his father– he finds himself pulled into a digital world where Kevin has been trapped for 20 years. With the help of the fearless warrior Quorra (Wilde), father and son embark on a life-or-death journey across a cyber universe — a universe created by Kevin himself that has become far more advanced with vehicles, weapons, landscapes and a ruthless villain who will stop at nothing to prevent their escape.

Writer/Director Steven Lisberger and his predecessor, director Joseph Kosinski have proven through both TRON and TRON: Legacy that they are truly visionary directors, and I mean that literally. Back in the early 1980s when Lisberger created TRON, he brought visuals to the movie screen that no one had seen the likes of ever before. Fans, like myself have always held a special place in their cinematic hearts for TRON, because of the vision that Lisberger created. Almost three decades later, Kosinski brought that same vision to life for an entirely new generation, much like the visual distinction between console video games of that era and present day video games.

While I’ve already reviewed the theatrical version of TRON:Legacy, I’ve never written an official review of the original TRON. I’ll give you my two-cents here, and then we’ll get on to the quality of this Blu-ray package and the guts of everything that’s included.

When I was just a young lad and saw the original TRON on Laserdisc (repeatedly), I thought it was the greatest thing in existence, aside from the original Star Wars: Episode IV – A New Hope and Star Wars: Episode V – The Empire Strikes Back. Of course I was young and didn’t know any better. As an adult, having just re-watched TRON, it really suffers from the same bits of clunky dialogue and moments where everything really grinds to a halt and kills the pace, other than that it’s a good movie. By taking the rudimentary (by today’s standards) visual effects in the context of their original era of release, they’re magnificent. I would likely give the original TRON, four out of five stars.

Now, on to the Blu-ray and all the included accoutrements that Walt Disney Studios Home Entertainment has bestowed upon the fans of TRON and TRON: Legacy.

First, let me say that the visual and audio quality of both films are beyond excellent. I was truly speechless by just how magnificent TRON: Legacy looked on my screen at home, so good in fact that I think it out-performed my local movie theater in the quality department. The picture seemed clearer and sharper, the colors were incredibly rich and the low-light scenes didn’t suffer any loss of detail, while the blacks levels remained very inky.

The audio on the Legacy disc was as impressive as the picture. The DTS sound mix was fantastic, and every audible detail in the surround channels truly popped, while keeping the dialogue crisp and clear amidst the subwoofer working overtime on the Daft Punk soundtrack. There are so many elements to the sound design in Legacy, all happening simultaneously and it’s impressive that the mix is so clear, with no muddiness and no component of the sound design having to suffer from a loss of presence or quality.

The visual quality of TRON: The Original Classic is really quite impressive for a film that is rapidly approaching the three decade mark. While there is some actual cinematic grain in the cut of the film (since it was shot on film), they have amped up the colors and crispness and revived a clarity in the film that hasn’t likely been seen since it first hit theaters. Thankfully, this isn’t a “special edition” where Lisberger went through with a VFX staff, frame-by-frame and employed modern CGI over the original rotoscopic effects. They’ve simply cleaned and polished the film to its original clarity, all of the flickering and pulsating defects from the original effects that we know and love are still ever-present.

Disney was thoughtful enough to include a 2.1 audio track for you purists out there, but there’s also a 5.1 lossless DTS track that presents most of the dialogue from the center channel, really pushes the surrounds in the computer world, and makes the original Wendy Carlos‘ soundtrack quite lush.

Now, on to the list of bonus features for both films, what you get in the combo pack and my overall star rating for the TRON: Legacy / TRON: The Original Classic 2-Movie Collection (5-Disc Combo) 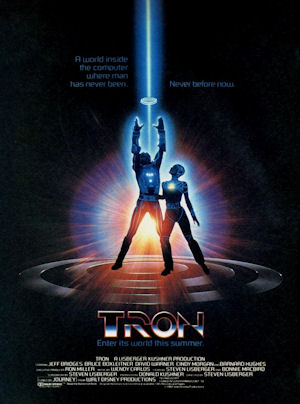 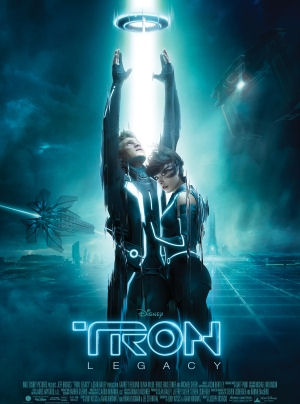 My review is based on the 2D Blu-ray version of both films included in the combo pack. I would assume, based on the quality of the 2D version, in comparison to the theatrical version that the 3D version would likely hold the same comparable quality.

While I do not have a 3D Blu-ray player yet, I commend Disney on their inclusion of the films in various formats. Having the ability to watch TRON: Legacy in a room that is only equipped with a standard DVD player, the digital copy to watch on a computer or portable device, the 2D Blu-ray discs of both films, not to mention the plethora of extras that are included, all while possibly future-proofing me from having to re-purchase Legacy on 3D Blu-ray at some point in the future is really quite fantastic.

I give the Tron: Legacy / Tron: The Original Classic (Five-Disc Combo: Blu-ray 3D) Five out of Five Stars.

Tron: Legacy / Tron: The Original Classic (Five-Disc Combo: Blu-ray 3D) hits shelves on April 5th. You can pre-order your copy at Amazon using the link below!