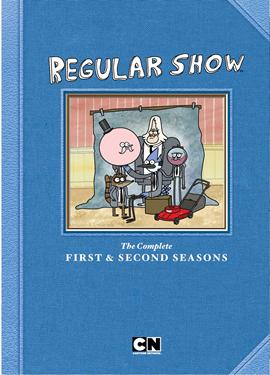 Cartoon Network will release the much anticipated complete seasons set for it hit animated comedy series Regular Show. Fans will love the Complete First and Second Seasons set available on Blu-ray (2-discs) and DVD (3-discs). This release will include all 40 episodes from seasons 1 and 2 plus over 2 hours of hilarious bonus content inspired by the creator. The Emmy award-wining hit comedy for Outstanding Animated Program is part of the popular Monday night line-up on Cartoon Network along with the hit show Adventure Time. The series stars two best friends and park groundskeepers, Mordecai and Rigby, who also happen to be a bluebird and a raccoon, whose attempts to escape their everyday boredom take them to fantastical extremes. Complete your Regular Show home video collection with the Complete First and Second Seasons set on Blu-ray and DVD

I had never seen Regular Show when I got the Blu-ray to review. It’s been renewed for its fifth season on Cartoon Network, which just isn’t one of our regular stations. I’ve always identified Cartoon Network with having cartoons geared more at adults and Regular Show is one of those cartoons that totally would have spoke to me in my 20s.

The show follows the two main character through the day to day aspects of their job, but as with any one who has held a job, even the most mundane assignments can easily become full of drama. And the drama always seems to find Mordecai and Rigby.

It isn’t enough that the characters and story represent people and situations we know and love in real life, but they’re not people; the characters are various animals and inanimate objects (like a gumball machine) and the situations are taken from the usual (like starting a picnic grill after being instructed not to) to the extreme (going on an adventure to find replacement hot dogs and discovering they’re not only sentient, but deadly).

The best part of Regular Show: The Complete First and Second Seasons on Blu-ray is that it is loaded with special features and commentary.

Regular Show: The Complete First and Second Seasons on Blu-ray is  a complete must have for fans. I suspect I’m slightly outside of the demographic. It was nice taking a trip down memory lane, but I’m not sure I’d watch it again, and my kids are too young to get why it’s funny. I’ll gladly keep this until they’re ready because it’s definitely funny.

I give Regular Show: The Complete First and Second Seasons Four Out of Five Stars