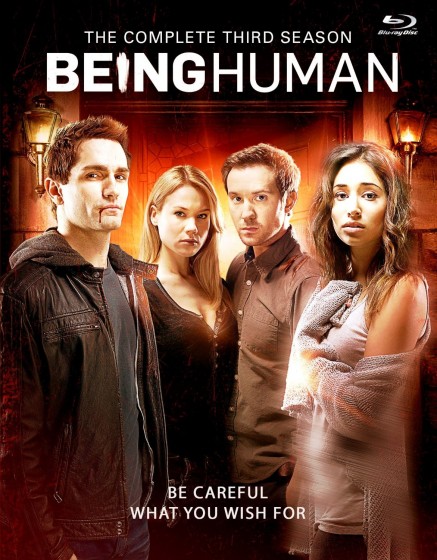 Creators: Anna Fricke and Jeremy Carver, based on the original UK version by Toby Whithouse

From the creative team behind “Pillars of the Earth,” “The Mentalist” and “Heroes,” Being Human is Syfy‘s re-imagining of the acclaimed BBC original series created by Toby Whithouse.  Being Human follows four paranormal, 20-something roommates living in a Boston brownstone – vampire “Aidan” (Witwer), werewolves “Josh” (Huntington) and “Nora” (Hager) and ghost “Sally” (Rath) – as they struggle to resist the temptations of their true natures.  As the third season of Being Human returns, the four learn that there is a price to pay for getting what they want.  Watching the characters hide their dark secrets from the world, while helping each other navigate the complexities of living double lives and trying to be human, viewership for the third season averaged 1.8 million viewers, making Being Human a Top 10 Cable Program in its time period among adults 18-49 and 25-54. Season 4 of Being Human premieres January 2014 on Syfy.

Sam Witwer, who plays vampire Aidan in Syfy‘s Being Human, told me near the end of shooting Season 3 that it was by far the strongest of their three seasons. He was absolutely right. The best thing about that is that the first two seasons were wonderful. But Season 3? Absolutely the best.

In Season 3, the writers get so much so right. They have really captured, enhanced, and strengthened what is special about the show. On top of that list is the chemistry of the four roommates. Give them highs and lows and laughs and sobs, but just don’t keep them apart for very long. They spent more time apart in Season 2 than was good for them, or us. That doesn’t happen in Season 3. 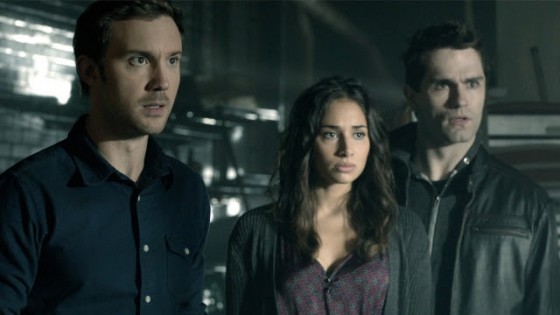 A close second is how likeable the four characters are. They’re hilarious, and fun, and smart, and clever, and attractive, and caring, and supportive, and brave, but also awkward, and therefore seemingly normal. We want to be their friends. We want to hang out with them, in their very cool home. And we want nothing but good for them. Sure, they screw up, but given that nearly everything they do has much higher stakes than in regular, normal, human life, it’s rarely a roll-your-eyes screw-up. It’s life and death. It’s important. It makes our wanting them to succeed, that much more important. They’re special, and they’re worthy of our support.

The story arcs for each of the characters in Season 3 are truly interesting and compelling. None of them are silly or trivial, though there are moments of sweetness and snark amidst the drama and peril. The twists and turns give quite a ride, and the cliffhangers are excruciating, but only in the best way. The guest cast is exemplary, every one a gem that fits in perfectly to this excellent setting. 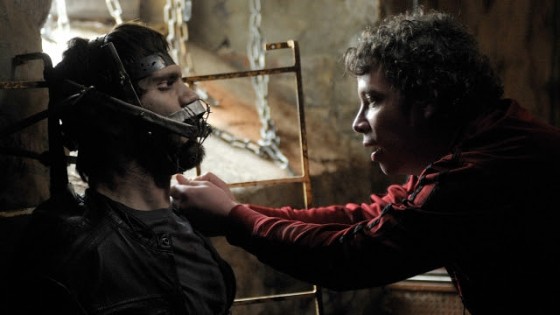 Cast, writers, set designers, special effects, casting, production, post-production, all combine to make this show something very special, and Season 3 definitely deserving of a place on your shelf – or better yet, on your Blu-ray or DVD player.

But what about that? Why Blu-ray/DVD instead of just catching the repeats some other way? Well, this particular set actually has me re-thinking my rule of No Commentary = No Five Stars. Because this set’s Behind the Scenes featurette has nearly everything you’d want in a commentary and more, because it isn’t limited to just the showrunner or the director or a couple of cast members. This 47-minute featurette includes comments by showrunner Anna Fricke and all four main cast members, along with people from the stunt and special effects departments, guest stars, and more. Nuts and bolts of how things were done, funny backstories, character development, insights into the writers room, all the things that are so great about commentaries, but from many different voices, and about the season as a whole instead of just one episode. It’s terrific, and is a must-watch for all fans, best done before your rewatch of the season. It of course is not for anyone new to the season or series, because spoilers abound. Watch the season first, then dig  in. 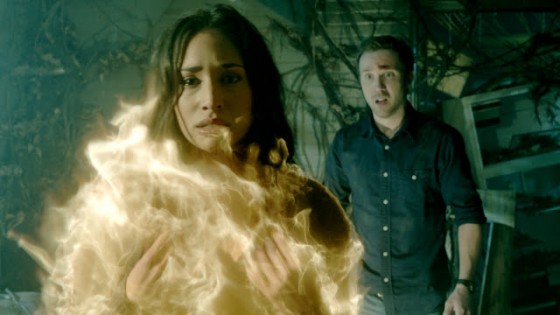 Other special features in this set include the Being Human panel from San Diego Comic-Con 2013, bloopers, and “The Cast on Cliffhangers”. The Comic-Con panel is unfortunately mostly a disappointment because for audio it uses the sound picked up from the auditorium; it’s pretty awful. It was actually much easier to understand the audio in the auditorium itself than it is to hear it on this recording. On the other hand, the panel took place after Season 3 concluded, so they’re actually there to promote Season 4, and we get some hints of what’s to come, as well as a discussion of the prior season.

In what may be a first, at least as far as I’ve seen, the “bloopers” are shown in episode order, with a title card by episode, which is really fun, and a nice enhancement. Apparently episodes 5, 6, and 9 went off without a hitch, since there aren’t any on the reel from those episodes, but there are still quite a few gaffes to be had from the majority of episodes. You knew there would be; this cast is fun and somewhat goofy, and you can tell there’s a great vibe on the set that’s going to allow for maybe a few more laughs than usual.

“The Cast on Cliffhangers” is a quick featurette with each of the castmembers talking just a wee bit about where their characters are left at the end of Season 3, and what just might happen in the season to come.

Packaging is fairly standard but with some good choices made. The Blu-ray set, which is what I reviewed, comes with a slipcover over a clamshell case with a swing card in the middle, so one disc per side, no double-stacking, a nice feature lately. The discs themselves only have numbers (1-4), but the inner lining of the case lists the episode names and numbers per disc, and – oh how I always love this – a brief description of each episode. Nice. 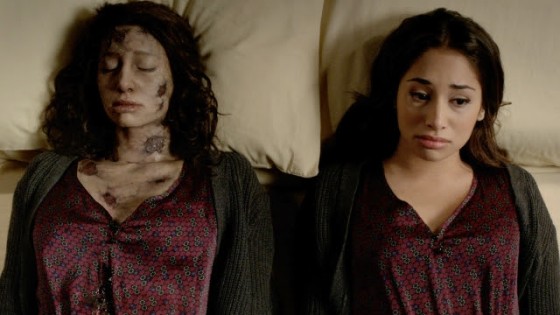 Being Human has long had the potential to join Haven as Syfy‘s representatives on my very very short list of Excellence on TV. With Season 3 they earn that place and then some. I love this series, and I really love this season. So go get this shelf-worthy series, and especially Season 3, on Blu-ray or DVD right now. They deserve it, and so do you.

I give Being Human: The Complete Third Season Five Out of Five Stars.

Being Human: The Complete Third Season is available from Amazon now! Here’s the link:
[AMAZONPRODUCT=B00G6HO4O4]