Great scott, it’s going to be a sci-fi packed weekend in Dallas! This coming weekend, February 9-10, 2013, Dallas Comic Con presents Sci-Fi Expo featuring a star-packed celeb guest list at the Irving Convention Center with Christopher Lloyd and Lea Thompson from Back to the Future, Avery Brooks aka Capt. Sisko of Star Trek: Deep Space Nine, Danai Gurira and Laurie Holden of The Walking Dead, Edward James Olmos, Tricia Helfer, and James Callis of Battlestar Galactica,  Sam Witwer of Syfy’s Being Human and Star Wars: The Clone Wars, and Morena Baccarin of Serenity and Homeland to name just a few.

Check out the official press release below and be there this weekend! (Quick links to tickets, schedule, and autograph prices are at the bottom of this post.) 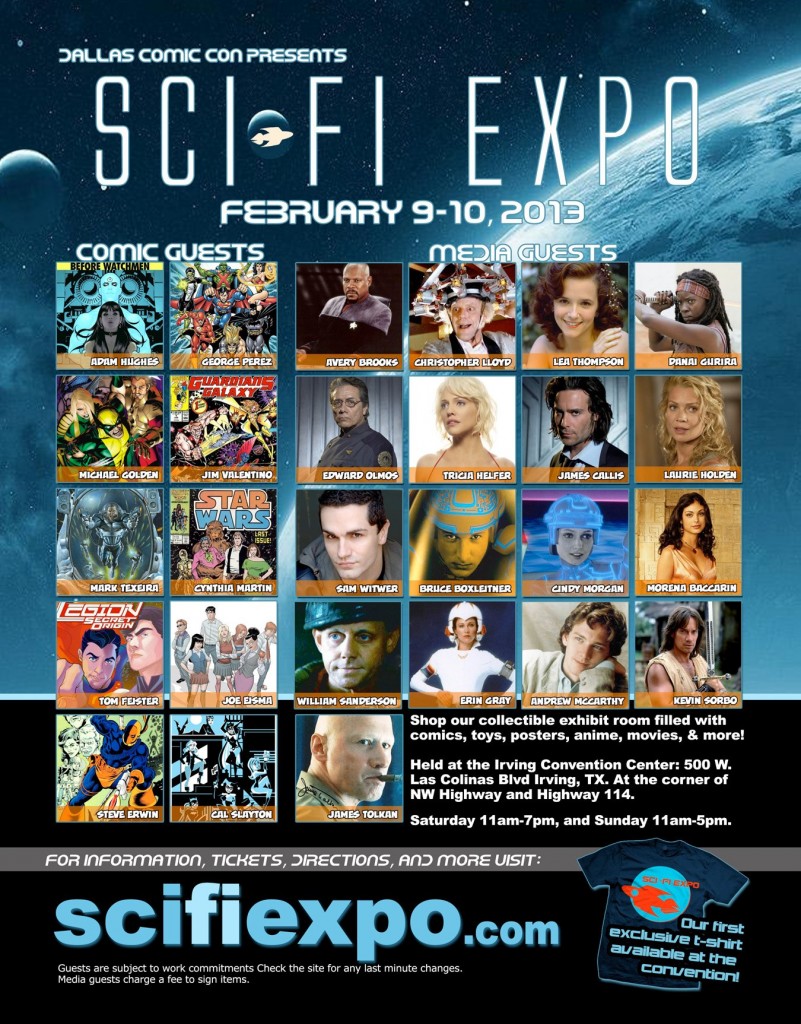 Sci-Fi Expo goes ‘Back To The Future’

The actors will be available to sign autographs, talk with fans and answer questions during special panel discussions, which are free to attend as space allows. Media guests charge a fee for autographs and fans also may pay to have a professional photographer take their photo with select actors. Comic guests also will talk with fans, do commissioned sketches as time allows, and offer a variety of merchandise for sale to attendees.

The two-day Expo features 300 vendor booths in the exhibit hall and fourth floor lobby. New to this show will be a “Cosplay Carpet” for the many fans who attend in costume, with a 30-foot backdrop and red carpet creating the ideal setting for viewing costumes and taking photos. Costume-clad fans also will vie for cash and prizes during Saturday evening’s costume contest.

Admission to Dallas Comic Con: Sci-Fi Expo is $25 Saturday and $20 Sunday. A two-day priority pass is available for $40, and children ages 5-12 are $5 when accompanied by a paying adult. Children ages 4 and under are admitted free. VIP passes for this show are sold out.

Tickets may be purchased at the box office beginning at 9 a.m. Saturday and 10 a.m. Sunday. Coupons for $5 off can be found in The Dallas Observer, Fort Worth Weekly and other North Texas newspapers.

For more information on events and schedules, please visit the website at www.scifiexpo.com.

Buy tickets! Priority 2-day and single day tickets are available online through February 6th at 3pm.  After that date, you will need to purchase admission tickets at the event.

Hope to see you there!