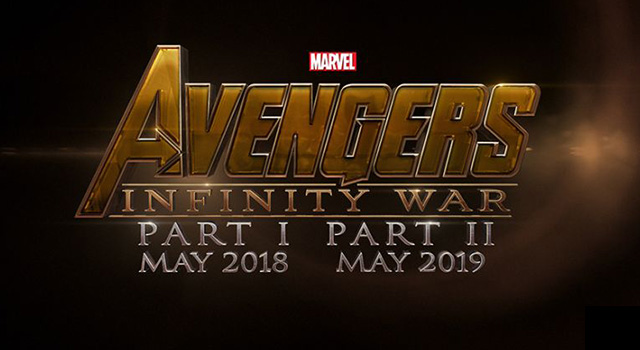 Marvel’s The Avengers Head Into an Infinity War

The Avengers face their biggest threat yet in a 2-part cinematic event!

The Avengers have already triumphed over Loki, and next summer they’ll face Ultron…but nothing could prepare them for the menace of Thanos.
How big of a threat does Thanos pose, you ask? Big enough to span two epic films, beginning with Marvel’s “Avengers: Infinity War Part 1” on May 4, 2018, and concluding in Marvel’s “Avengers: Infinity War Part 2” on May 3, 2019 for one massive cinematic event.
“We’ve always had a plan since Nick Fury broke into Tony Stark’s house and told him he’s part of a bigger universe,” recalled Feige. “‘Avengers: Infinity War Part 1‘ is the beginning of the culmination of everything that has come before.”
Hold onto your hats, True Believers, because Phase 3 of the Cinematic Universe is going to be one wild ride! Stay tuned to Marvel.com for the latest on the Avengers and the rest of the Marvel Cinematic Universe as it develops!