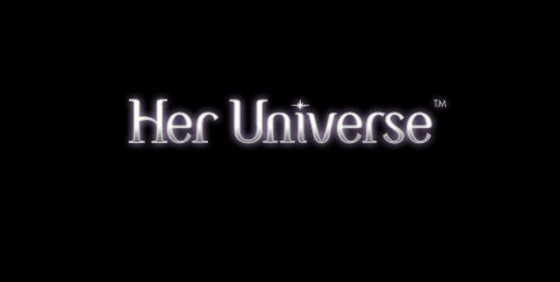 Star Wars: The Clone Wars actress Ashley Eckstein has been busy designing a brand new line of Star Wars apparel for women and girls of all ages. Eckstein’s apparel line, Her Universe, unabashedly celebrates the fangirl with female sci-fi genre line of apparel and accessories. This latest line of Star Wars apparel will debut at Disney’s Star Wars Weekends, beginning May 18th through June 10th and online at Her Universe on May 21st.  Check out the official press release below!

NEW YORK, NY – MAY 15, 2012 – It’s a good time to be a fangirl of the Star Wars saga as Her Universe, the female sci-fi genre line of fashionable apparel and accessories, revealed today it’s new Spring/Summer line to debut at Star Wars Weekends at Disney’s Hollywood Studios in Orlando, Florida on May 18th (running each weekend till June 10th) and online at www.heruniverse.com on May 21st.

Created by actress Ashley Eckstein, the voice of Ahsoka Tano on Star Wars: The Clone Wars, the current seasonal offering from Her Universe Includes a racer back tank top and fashion tops featuring such beloved characters as Princess Leia, R2-D2 and Darth Vader as well as a unique Princess Leia zip-hoodie and a fun Ahsoka Tano youth tunic created to help young girls feel just like Anakin’s Padawan learner on The Clone Wars. To accentuate the new Star Wars apparel, Eckstein and Her Universe are offering two new charms – a Boba Fett design and a Japor Snippet replica, the good luck charm given as a gift to Padme from a young Anakin Skywalker. All of this Star Wars treasure can be carried in the new cotton canvas Star Wars tote bag featuring the Star Wars symbols. Several new apparel pieces are also being introduced for the younger “Jedi-in-training” including several Star Wars youth designs and, for the first time, a Jedi onesie for the tiniest followers of the Force featuring the adorable art of popular Star Wars illustrator Katie Cook.

“I was very excited when Ashley approached me to do kids’ designs for Her Universe,” said Cook. “She’s doing a wonderful thing for the female fan community already… and she’s doing those of us with little girls an even bigger favor by giving the littlest fangirls nerdy gear of their own!”

In addition to the new product line being available at Disney’s Star Wars Weekends, Eckstein will also, for the fourth year in a row, be co-hosting the Behind The Force live stage show and signing autographs each weekend of the event.

“Disney’s Star Wars Weekends is one of my favorite events of the year,” said Ashley Eckstein. “I truly enjoy meeting Star Wars fans of all ages and that’s why I am so excited to be offering merchandise for women, girls and now babies! As the voice of Ahsoka Tano, I cannot wait to see baby girls in an Ahsoka “Jedi in Training” onesie or little girls running around in Ahsoka’s new costume top!”

Her Universe was launched in 2009 by Eckstein, and her partner, The Araca Group, known as one of the most innovative theatrical production and merchandise companies in the world. Her Universe was created to directly address the expanding market of female fans by entering into its first agreement with Lucas Licensing to develop and produce a line of female-centered Star Wars apparel and accessories. The success of that line was followed up with a collection for the Syfy network including such shows as Battlestar Galactica. Visit www.heruniverse.com to purchase the new Star Wars collection or visit a Hot Topic store near you to find select Her Universe items. You can also learn more about Her Universe by following Eckstein on Twitter and visiting the Her Universe Facebook page. 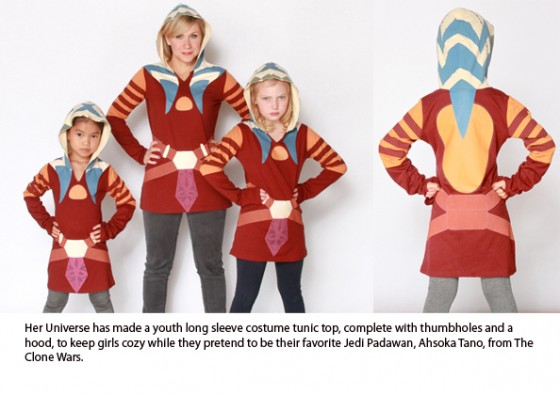 Did you catch our exclusive interview with Ashley Eckstein last fall? Read on here. Her Universe clothing is also now available at Hot Topic.