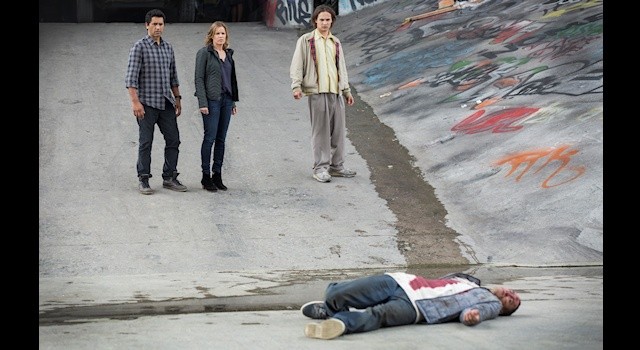 NEW YORK, NY – March 9, 2015 – AMC today announced that it has placed an initial two-season order for a companion series to The Walking Dead, the #1 show on television among adults 18-49 for going on three seasons.

The new series (title to be announced) will be set in Los Angeles and focused on new characters and storylines. The show’s first season will consist of six one-hour episodes and premiere on AMC in late summer. The show’s second season will air in 2016.

Robert Kirkman, Gale Anne Hurd, Greg Nicotero and David Alpert from The Walking Dead are executive producers of the new series, which, like the original, is being produced by AMC Studios. Dave Erickson (Marco Polo, Sons of Anarchy), who co-created and co-wrote the pilot with Kirkman, is an executive producer and showrunner. The series will star Cliff Curtis (Missing, Gang Related), Kim Dickens (Gone Girl, Sons of Anarchy), Frank Dillane (Harry Potter and the Half-Blood Prince) and Alycia Debnam Carey (Into the Storm).

“We take incredibly seriously the notion of building a satisfying companion series to the number one show on television. From the beginning of The Walking Dead’ on AMC, we’ve been asked questions about what was going on in other parts of the zombie apocalypse, and what it looked like as the world really did ‘turn.’ Through this new series, we’re going to find out,” said Charlie Collier, AMC president. “Robert Kirkman, Dave Erickson and their writing team, along with an incomparable set of producers, cast and crew have created something remarkable and clearly distinct. We respectfully follow the request of Monty Python as we bring out (the latest of) our Dead.”

“We feel empowered by this two-season commitment, a serious show of faith from our network partner AMC,” Kirkman said.  “I personally take it as a sign that they believe, like we do, that we’ve accomplished our goal of developing something original that can pay tribute to the original show and expand the world I created while at the same time having something new to say with this story.  I’m very grateful that we now have the opportunity to tell this amazing story and show the fans that we really haven’t scratched the surface yet when it comes to The Walking Dead.”

“This vote of confidence from our partners at AMC is gratifying, to say the least,” Erickson said. “We’ve been blessed with amazing writers and a stellar cast – and we can’t wait to build this apocalyptic drama over the next two seasons and hopefully beyond.”

In addition, AMC Global, the international AMC-branded television network, announced it has acquired the international television rights to the series, which it plans to air within 24 hours of the U.S. premiere. AMC Global launched in late 2014 and is available in over 115 countries and territories throughout Latin America, Europe, Asia, Africa and the Middle East.

Whether commemorating favorite films from every genre and decade, or creating acclaimed original programming, AMC brings to its audience something deeper, something richer, Something More. The network reigns as the only cable network in history ever to win the Emmy® Award for Outstanding Drama Series four years in a row with “Mad Men,” and six of the last seven with current back-to-back honoree, “Breaking Bad.” The network boasts the most-watched drama series in basic cable history and the number one show on television among adults 18-49 for the last two years with “The Walking Dead.” AMC’s original drama series include “Mad Men,” “The Walking Dead,” “Better Call Saul,” “Hell on Wheels,” “TURN: Washington’s Spies,” “Halt and Catch Fire,” and the forthcoming “Humans,” “The Making of The Mob: New York,” “Into the Badlands” and “The Night Manager.” AMC also explores authentic worlds and discussion with original shows like “Talking Dead” and “Comic Book Men.” AMC is owned and operated by AMC Networks Inc. and its sister networks include IFC, SundanceTV, BBC America and WE tv. AMC is available across all platforms, including on-air, online, on demand and mobile. AMC: Something More.