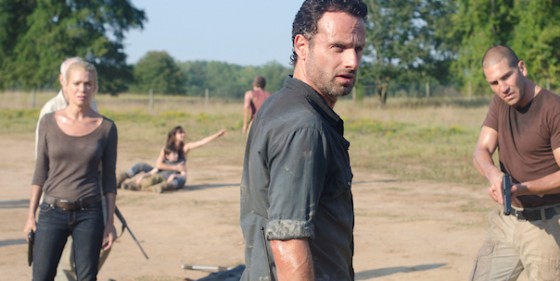 Were you watching the season 2.5 premiere of The Walking Dead Sunday night? Wasn’t it excellent? Don’t worry, if you haven’t seen it yet, you won’t get spoiled here. We’ll even give you a link to watch it online for free, courtesy of AMC, at the end of this post.

If you were watching, however, you were apparently not alone. Including probably all of the SciFi Mafiosi, there were 8.1 MILLION viewers last night. Comic Book Men also did well on its series premiere last night. Here is the AMC press release:

REIGNS AS THE STRONGEST DRAMA TELECAST

“It is a great night for AMC. We’re thrilled to see this incredible record breaking response to ‘The Walking Dead,’ and ‘Comic Book Men’ is off to a strong start as well. Congratulations to the teams behind both of these shows,” said Charlie Collier, AMC’s president.

Following are the Key Nielsen Highlights:

Leading the crew behind the Secret Stash counter are moody manager Walt, uber-nerd Mike, career slacker Brian, and Ming, the shop’s go-to whipping boy.  As the team buys, sells and discovers the treasures of the comic collecting world, they share all the juicy details with Kevin through their outrageous podcast, which is woven throughout the series.

“The Walking Dead” is also back on all Fox International Channels’ worldwide this week. FIC plans to release its global numbers early next week.

If you missed The Walking Dead‘s midseason premiere, click here  to watch the episode online, but do it soon; AMC says that it will only be available for a limited time.