Verily You Must Prepare Thyself To Own KNIGHTS OF BADASSDOM 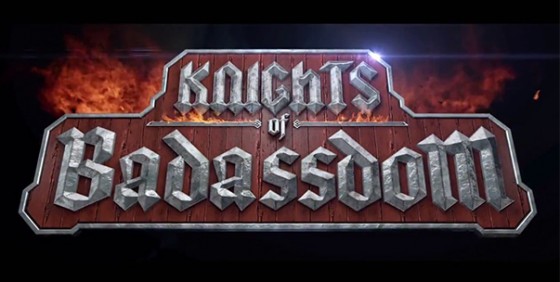 PETER DINKLAGE, STEVE ZAHN AND RYAN KWANTEN GET MEDIEVAL IN THIS ROLE-PLAYING, GENRE-BENDING COMEDY WITH A DARK (AGES) TWIST

New York, NY – Sound the horns and prepare thyself for a most glorious tale of battling knights, spell-casting wizards, fair maidens and one blood-thirsty demon from the netherworld in KNIGHTS OF BADASSOM.  Starring Peter Dinklage (“Game of Thrones”, The Station Agent), Steve Zahn (“Treme”, Dallas Buyers Club), Ryan Kwanten (“True Blood”, Dead Silence) and Summer Glau (“Arrow”, “Terminator: The Sarah Conner Chronicles”), this 2014 theatrical release called “a blast and a half” (Max Nicholson, IGN), marches onto extras-loaded DVD and Blu-ray editions on April 1 from Entertainment One.  Cans’t thou handle it?

KNIGHTS OF BADASSDOM follows three best friends (Dinklage, Zahn and Kwanten) and dedicated LARPers (Live Action Role Players) as they take to the woods to reenact a dungeons and dragons-like scenario fresh out of the Middle Ages. Trouble arises after they unwittingly conjure up some serious evil in the form of a blood-lusting Succubus from the pits of hell.  And as fantasy and reality collide on the Fields of Evermore in an all-out epic battle of make-believe wizards, demons and assorted mythical creatures, their courage and friendship is put to the test as they attempt to vanquish the evil they have summoned.  Will the group prove to simply be foam sword-wielding LARPers or true “Knights of Badassdom?”  Art thou ready to find out?

About Entertainment One
Entertainment One Ltd. (LSE:ETO) is a leading international entertainment company that specializes in the acquisition, production and distribution of film and television content.  The company’s comprehensive network extends around the globe including Canada, the U.S., the UK, Ireland, Benelux, Spain, France, Germany, Scandinavia, Australia, New Zealand, South Africa and South Korea.  Through established Entertainment and Distribution divisions, the company provides extensive expertise in film distribution, television and music production, family programming and merchandising and licensing. Its current rights library is exploited across all media formats and includes more than 35,000 film and television titles, 2,800 hours of television programming and 45,000 music tracks.

You can preorder Knights of Badassdom from Amazon right now! Huzzah!