Haven Season 4 is coming to wrap itself around us in all its creepy mysterious gorgeous Nova Scotia-posing-as-New England goodness, and I am SO READY. They’ve even made it easy to remember the premiere date: Friday the 13th of next month.

With so many shows, new characters can be disruptive, but the casting in this series has always been impeccable, and seamless with the writing and the collective excellence of the show. And no matter how hard they try, and sometimes they do try, guest stars seem to never be able to permanently break up my favorite love/buddy triangle of Audrey, Nathan, and Duke.

But wait til you see who Christian Camargo (Dexter) plays… And wait til you read the update on what’s going on in Haven when we return. Go on, read it: 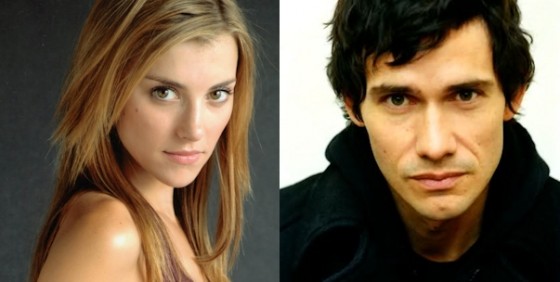 Emma Lahana portrays “Jennifer Mason” an eccentric, energetic and just a bit off-kilter young lady who gets pulled into Haven’s mysteries when she starts hearing strange voices in her head. These voices lead her to crossing paths with a town fixture who suspects her “condition” could produce valuable clues about Audrey Parker’s (Emily Rose) whereabouts. As Jennifer digs into her own personal history, she discovers she may have a bigger role to play in the strange happenings in Haven.

Meanwhile, Christian Camargo plays “Wade Crocker” the estranged half-brother of Haven mainstay Duke Crocker (Eric Balfour). Charming, driven, and slightly devious, Wade is a successful and good-natured businessman who seems to be at the top of his game. But, Wade is a Crocker through and through and could be tempted by a dark and lethal family secret that just may be his undoing.

Season 4 of Haven picks up six months after the devastating events of the Season 3 cliffhanger in which the town was pummeled by a violent meteor storm. Audrey and Duke vanished into thin air leaving an injured Nathan (Lucas Bryant) marooned in Haven.

About Syfy
Syfy is a media destination for imagination-based entertainment. With year round acclaimed original series, events, blockbuster movies, classic science fiction and fantasy programming, a dynamic Web site (www.Syfy.com), and a portfolio of adjacent business (Syfy Ventures), Syfy is a passport to limitless possibilities. Originally launched in 1992 as SCI FI Channel, and currently in more than 98 million homes, Syfy is a network of NBCUniversal, one of the world’s leading media and entertainment companies. NBCUniversal is owned by Comcast Corporation. (Syfy. Imagine greater.)

About Entertainment One
The company’s comprehensive network extends around the globe including Canada, the US, the UK, Ireland, Spain, Australia, New Zealand, Benelux, France, Germany, Scandinavia, South Africa and South Korea. Through established Entertainment and Distribution divisions, the company provides extensive expertise in film distribution, television and music production, family programming and merchandising and licensing. Its current rights library is exploited across all media formats and includes more than 35,000 film and television titles, 2,800 hours of television programming and 45,000 music tracks. http://www.entertainmentonegroup.com/

And just because it’s so cool, here’s that trailer from Comic-Con 2013 one more time. If you’re new to the show, the first half of the trailer is about last season, the second half about what’s to come…