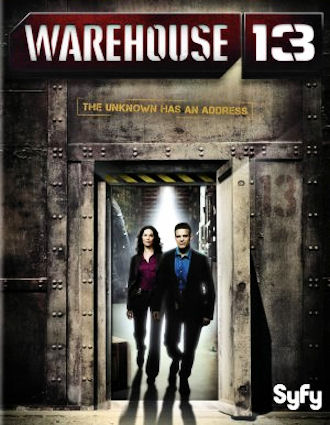 Series Summary: Warehouse 13 follows a team of government agents who work at a massive, top-secret storage facility in windswept South Dakota which houses every strange artifact, mysterious relic, fantastical object and preternatural souvenir ever collected by the U.S. government. The Warehouse’s caretaker Artie Nielsen (Saul Rubinek) charges agents Pete Lattimer (Eddie McClintock), Myka Bering (Joanne Kelly) and young apprentice Claudia Donovan (Allison Scagliotti) with chasing down reports of supernatural and paranormal activity in search of new objects to cache at the Warehouse, as well as helping him to control the Warehouse itself.

Episode Summary:  An artifact propels Pete into a life where he was never born. Now, in order to get things back to normal, he must hunt down and persuade the Warehouse team to join him on a life-or-death mission. 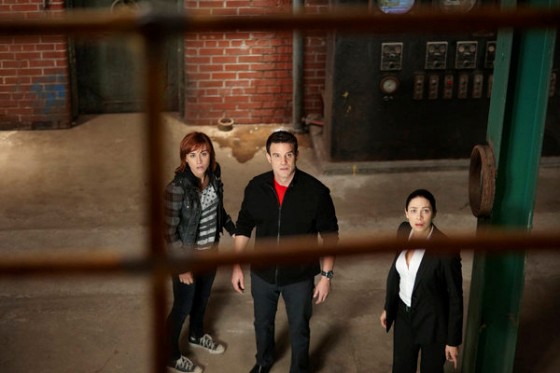 As you can see from the episode summary, this is an It’s a Wonderful Life episode. I love that movie, and I’m not alone. It is such a Christmas icon that many, many shows have done their own spin on it, oftentimes turning it into a cheap sappy glob o’ Christmas goo. I’m happy to report that Warehouse 13 absolutely puts its own stamp on it, and rather than being something akin to stale peppermints, it is in fact one of my very favorite Warehouse 13 episodes ever.

Just like the holiday episode of Eureka that precedes this Warehouse 13 broadcast, this episode “exists out of time” from the rest of the series, so there will be no reference to big things that happened at the end of the most recent season. Also just like the Eureka holiday episode, this episode includes a Christmas celebration but no religious references; it is a celebration of friends and family, and how friends become family.

If you’re a fan of the show: You should love this episode. It’s Pete at his best and most heartfelt, without the supersilliness  that sometimes overshadows his interactions. Eddie McClintock has said that Pete’s apparent goofiness is really Pete’s coping mechanism. Okay, I can see that, but it can still get kind of irritating. This episode escapes that, while remaining totally in keeping with Pete’s energy and enthusiasm. Not only is it a great Pete episode, but it’s really a salute to the fans, because it highlights the things that we most love about each of the characters at their cores.

If you’ve never seen the show: You will miss some of the joy of recognition that veteran fans will get as they watch Pete use his knowledge of the others to find ways to reach them as a stranger. Nevertheless you should enjoy the episode because you will be meeting these characters just as Pete is re-meeting them, and you’ll likely see why this show is one of Syfy’s most popular original series ever. It’s a great opportunity; this show is a treat.

I enjoyed this holiday offering more than I expected to, and took real delight in an unexpected number of sweet (but not overly saccharine) moments. It truly became instantly one of my favorite Warehouse 13 episodes ever.

I give Warehouse 13: “The Greatest Gift” Five out of Five Christmas Stars.