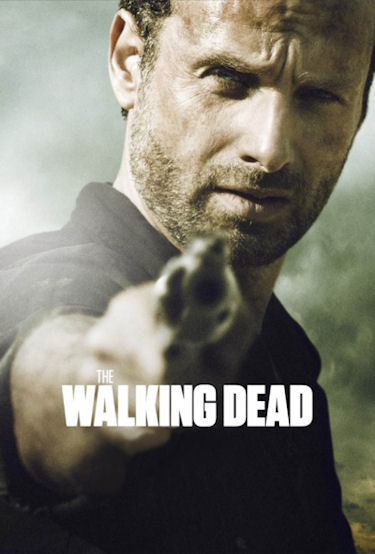 Summary: Based on one of the most successful and popular comic books of all time, written by Robert Kirkman, AMC‘s The Walking Dead captures the ongoing human drama following a zombie apocalypse. The series follows a group of survivors, led by police officer Rick Grimes, played by Andrew Lincoln (Love Actually, Teachers, Strike Back), who are traveling in search of a safe and secure home. However, instead of the zombies, it is the living who remain that truly become the walking dead. Jon Bernthal (The Pacific, The Ghost Writer) plays Shane Walsh, Rick’s sheriff’s department partner before the apocalypse, and Sarah Wayne Callies (Prison Break), is Rick’s wife, Lori Grimes. Additional cast include: Laurie Holden, Steven Yeun,Norman Reedus, Jeffrey DeMunn, Chandler Riggs, IronE Singleton and Melissa McBride. 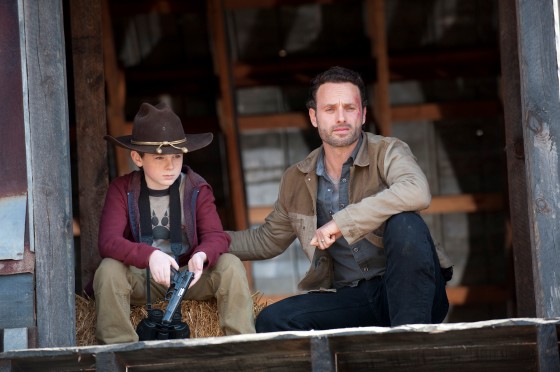 I believe that in future years this episode will be referred to, with reverence, as the Something For Everyone episode. Let’s start with the cinematography, because in an episode of Well Dones, this is the Most Well Done. It is easily one of the most beautifully shot episodes that I can remember. From the opening scenes in the morning with the striking lighting, to a special moment between two survivors, to a particular telling view of one of the characters as seen through a special lens, to a wide shot that should be a billboard for the episode, to the closing moments, it is absolutely stunning work. Kudos to the director, director of photography, the post production crew, and anyone who had anything to do with the visuals of this episode.

Okay okay, except for the night scenes. I’m presuming that the big difficulty I had in seeing the night scenes was because I was watching a screener online as opposed to watching TV, but if not, that would be the one disappointment in an otherwise visually superior episode. They’re important scenes, and worth a rewatch if you are having any trouble seeing. In fact, just plan on rewatching the episode, you’ll want to, and now you can plan your life accordingly.

Beyond the jaw dropping look, I said there’s something for everyone, and there is. Without getting too specific, this week we get character development, some not-too-soapy relationship scenes, some action, and yes, at least one zombie. Because, you know, this is a zombie show. We even get an answer to a question, which of course poses a new question. Sorry.

There is, as usual, more than one storyline, and they all progress this week. What we get that’s more unusual are some lovely vignettes; they feel intimate but not removed from the overall pall that has been cast with the loss of Dale. They are therefore not disjointed but are parts of a whole, something that has been mostly missing from this season. Whether that’s by design – is the group that was becoming more and more splintered now coming together? – or not will be more clear, perhaps, after next week’s season finale. There is even a quiet attempt at humor, although it was less than one line long; this feels completely appropriate given that the group is grieving.

Nothing feels extraneous, and LOOK, IT’S T-DOG! MORE THAN ONCE! Imagine all sorts of fun celebratory emoticons here. Well, I suppose it shouldn’t be a very large party, as it’s not as if the episode is T-Dog-centric as is his due, but at this point we’ll take what we can get. The Nearly Entirely Excluded Character du Jour (I know) is Jimmy,  but he has always been a part-timer at best, so I’ll cry no tears if his screen time is given over to our favorite underused regular cast member, IronE Singleton.

Andrew Lincoln (Rick) and Jon Bernthal (Shane) surpass every previous performance. Steven Yeun (Glenn) makes me cry (I hate crying, but he’s forgiven) and Laurie Holden (Andrea) is really lovely in that same scene with him, and really in all of her scenes.

You’ll see more Shakespeare in this episode – or is it Sophocles? or even Darwin? Time may tell. The point is that this series is at its heart a question of whether humanity can survive intact under these brutal conditions, and that question is raised once more this week but we are no closer to the answer. The title, from Lincoln’s first inaugural address on the eve of the Civil War, only serves to underscore the ambiguity. You’ll see.

I give The Walking Dead: Season 2, Episode 12 “Better Angels” Five Out of Five Stars.