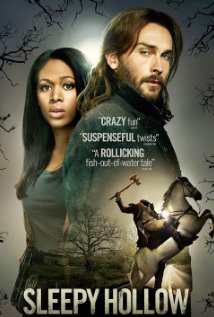 After being resurrected and pulled two and a half centuries through time, ICHABOD CRANE (Tom Mison) finds himself in modern-day Sleepy Hollow, where he quickly realizes that evil has awoken with him. When Sheriff August Corbin (guest star Clancy Brown) is killed by the infamous Headless Horseman, Ichabod forms an unlikely bond with Detective ABBIE MILLS (Nicole Beharie), a young cop who has her own childhood supernatural experiences. Together, the two embark on a mission to stop evil and uncover mysteries dating back to the founding of our country. Captain FRANK IRVING (Orlando Jones) hesitates to believe Ichabod’s tales of supernatural evil. But when Ichabod’s former wife, KATRINA (Katia Winter), provides clues about impending evil, they all begin to realize that this town is anything but sleepy.

When Ichabod Crane goes missing, his wife, Katrina, appears to Lt. Abbie Mills in a vision warning her that the Headless Horseman will return to Sleepy Hollow by nightfall.  A frantic Abbie seeks help from the mysterious Henry Parrish (guest star John Noble), who holds vital clues about how Crane can vanquish his dangerous blood tie to Headless. Meanwhile, an encounter from Crane’s past weighs heavily on him, and details about his first encounter with Katrina are revealed in the all-new “The Sin Eater” episode of SLEEPY HOLLOW airing Monday, Nov. 4 (9:00-10:00 PM ET/PT) on FOX.

Sleepy Hollow is my favorite new show of the season; it is absolutely terrific. Sure I’m an American history fan but it’s more than that. It’s Tom Mison and Nicole Beharie, the leads who own their roles with conviction, and it is the production which feels so beautifully Fringe-like in atmosphere, lighting, detail, and sound, thanks to the shared co-creators, producers and more. Which is the absolutely perfect way to welcome John Noble back into our homes this week, as a recurring guest star on the new show.

This is John Noble in his element. He is in no way Fringe‘s Walter in this series, but he is in the best of hands. He is given all of the support and all of the room that he needs to bring his character instantly to life. Not that he needs that kind of help. But when a beloved actor from a beloved series shows up in a new series, it is wonderful to see him presented to us so perfectly.

It would have been wrong for him to be in any way befuddled, or brilliant, or enraged, and he is none of those. They wrote a terrific part for him, one that is happily a recurring one. Tom Mison said recently that “when you’re acting with someone like John you just completely lose yourself in it,” and you see that in this episode. They are terrific together, and I’m looking forward to seeing more. 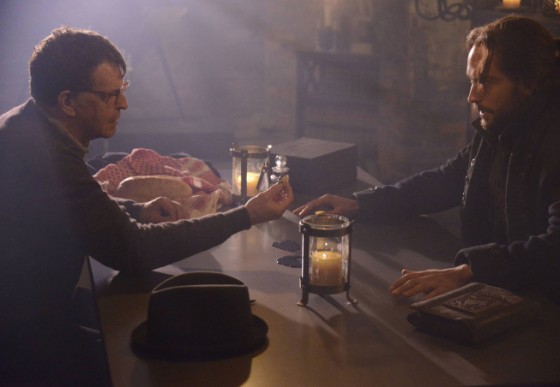 As for the rest of the episode, one of the other Fringe-related things that I love about this series is the way that humor is written in. When Fringe was on the air I said it was my favorite comedy, and it was. Just a line, here and there, scattered throughout the episode played straight and usually played by Walter, but it always made me laugh out loud.

Sleepy Hollow has followed in those footsteps, but this week the comedy is limited to the opening, and that’s it. We could use one or two more lines somewhere, but I understand the choice; this is an extremely serious episode. 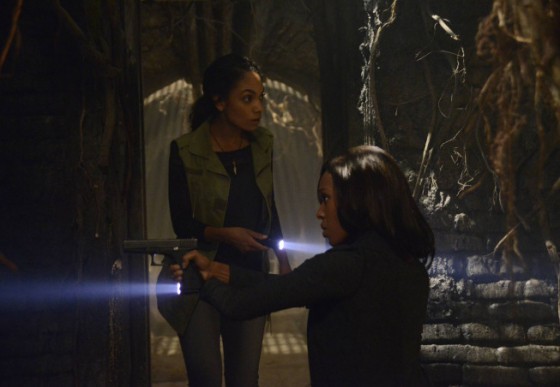 Like with the previous five episodes, the premise of “Sin Eater” is more than a little ridiculous, but hello, that’s at least part of what makes it Our Kind of Show. Just go with it. And if you think that one particular aspect of it seems to not make complete sense, stay with it, it will.

If you’re new to the series and would like to watch this episode because of John Noble, you’ll enjoy the episode a lot more if you can catch up first on Fox.com or On Demand, but it isn’t an absolute requirement.

It’s another great episode in a genuinely terrific series, and I know it will only get better.

I give Sleepy Hollow, Episode 106 “Sin Eater”, Four Out of Five Stars.