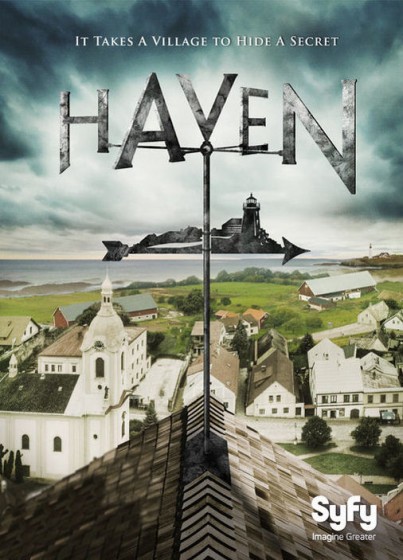 Series Summary: When FBI agent Audrey Parker (Emily Rose) arrived in the town of Haven, Maine, she discovered that the seemingly sleepy town was, in fact, a longtime refuge for people with supernatural afflictions. Now Audrey must not only stay on top of Haven’s many afflictions, but also solve her most challenging case yet: the secret of her own lost past and its ties to Haven. With the help of Nathan Wournos (Lucas Bryant), a handsome local cop with his own trouble, and Duke Crocker (Eric Balfour) a local smuggler and reluctant aide in solving Haven’s troubles, Audrey digs deeper into uncovering her identity.

Episode Summary: Christmas decorations are popping up all over Haven yet nobody but Audrey thinks it’s strange – even though it’s July! But when the townspeople start disappearing into thin air, Audrey convinces Nathan they must find a way to stop it before it’s too late. 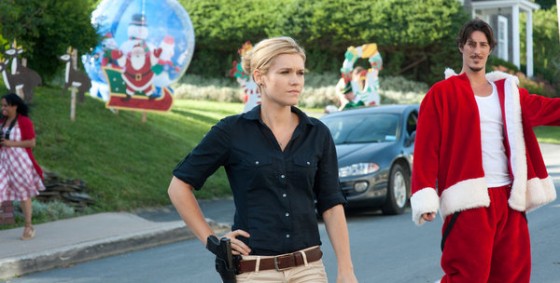 I love this show. I love the characters, I love their interaction, I love the “Maine” setting (actually shot on location in small towns in Nova Scotia), and I love the science fiction aspect. I was therefore thrilled to be back in Haven again, no matter what. Happily, though, the story does not disappoint.

It is, whether consciously or not, based on a combination of a storyline from one of my favorite Star Trek: The Next Generation episodes, and one aspect of a Stephen King book that is currently being turned into a pilot, hopefully to be picked up as a series. No, I’m not going to tell you which episode or book. Spoilers.

This is the most dramatic of Syfy’s three-in-one-night Christmas specials – it is the only one that got me a little misty-eyed – but it has plenty of light moments, and even more charm, and of course, a wee bit o’ the creepy. Like the Eureka and Warehouse 13 holiday episodes that precede it, it is a standalone offering with no reference to the events of the last one or two episodes of last season. Also like the other two holiday specials, there is a Christmas celebration that has no religious undertones but is instead a celebration of the importance of friends as family.

If you’re a fan of the show: You’ll join me in being so happy to be back in our favorite weird town. We get plenty of Audrey and Nathan and Duke, as they were before the developments at the end of the last season; the same is true of our favorite brothers who run the local newspaper. Quirky townspeople. Weird troubles. Some nice, kinda cool effects. Just what you’d hope for in an episode that is meant to become a classic.

If you’ve never seen the show: Watch this! But don’t miss the opening segment, because they narrate a lovely overview of who’s who and what’s what, right at the very beginning. After you see this episode, knowing (because I’m telling you) that it is very typical of the feel, style, and tone of the show, you’ll want the season 1 DVDs under your tree in a couple of weeks, and you’ll be waiting along with the rest of us for the release of season 2 on DVD. The only thing you need to know, that they don’t really tell you clearly enough up front, is that the main character, Audrey, is generally immune to The Troubles (the special abilities that some of the townsfolk have) when The Troubles are the kind that effect other peoples’ minds and perceptions.

I love Haven and this first Christmas episode is in no way a disappointment. I’ll watch this every year, and am hoping they’ll put it on a DVD or better yet, a Blu-ray DVD combo set.

I give Haven: “Silent Night” Five out of Five Christmas Stars.