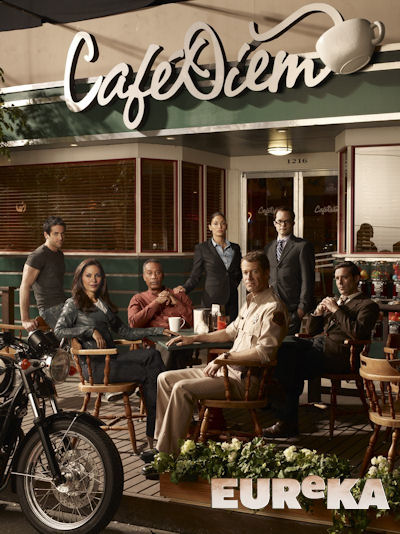 Eureka seems like any other cozy, Pacific Northwest town, but is actually a secret community of geniuses assembled by the government to conduct top-secret research. What they’ve unwittingly created is a place where anything imaginable can happen … and does. Eureka stars Colin Ferguson (Sheriff Jack Carter) Salli Richardson-Whitfield (Allison Blake), Joe Morton (Henry Deacon), Erica Cerra (Jo Lupo), Neil Grayston (Douglas Fargo) and Niall Matter (Zane Donovan). Returning for the final season will be popular guest stars Wil Wheaton (The Big Bang Theory, Star Trek: The Next Generation) as the contentious Dr. Parrish and Felicia Day (The Guild, Red) as Dr. Holly Marten. Co-creator Jaime Paglia and Bruce Miller are executive producers. The series is produced and distributed by Universal Cable Productions.

Wow. Okay… that’s an interesting start to the final season! It begins hard and fast, so don’t worry that it will take half of the episode to find out why the promos keep saying “in the final season of Eureka, everything you know is wrong.” Remember, when the last season ended, Allison had been trapped on the Astraeus, and the launch had been accelerated by a person or persons (or artificial intelligence or random factor – this is Eureka, after all) unknown. The new season starts within minutes of the end of the last season.

After the opening sequence you’ll find that the tone of this episode, if not the whole season (I’ve not yet watched any others), is quite different. It’s darker, though not in an edgy way like the first season. And trust me, no one would ever confuse this show with Battlestar Galactica. Still, for Eureka this is definitely a shift, and for me it’s a welcome one. This show had often drifted into the realm of extreme silliness, to the exclusion of its strengths, which for me have always been the chemistry between the characters, the celebration of the smart, and the cool science-y bits. It truly celebrates intellect and the excitement of the once-thought-impossible, and manages to do it without the constant personal ridicule of … well, a certain other show about scientists.

Never fear, those of you who love the silliness, it’s there, but it’s limited to two characters, in relatively small scenes. To me it felt out of place, but it did a nice job of lightening the mood and will be appreciated by many fans. Although the episode has a different tone, it’s still Eureka; a lovely, cozy, sci-fi-lite but now with an extra infusion of sci-fi deliciousness that makes it an even bigger pleasure.

One of the aspects that a long-time viewer will appreciate this week is that the theme of evil overlord, first introduced with Dr. Nathan Stark and carried forward with Eva Thorne and General Mansfield, is bumped up a notch, with a surprisingly creepy bad guy, the primary cause of the darker tone of the episode. While not as full-on creepy as Chitty Chitty Bang Bang’s Child Catcher, there is definitely a moment or two that could be a bit scary to small children. How great is that?!

Speaking of movies… well, I can’t. It would be too spoilery. Suffice to say, err, hmm.. Trust the writers. Watch the episode. Then watch it again, carefully. Nicely, nicely done, Mr. Paglia and your friends in the writers’ room. This episode takes the show up a notch, and though there are no standout lines – except one hilarious one, delivered with perfection by Colin Ferguson – the storyline writing is solid, and moves along nicely. The many opportunities to slow down the tempo are deftly avoided here, so that even the reflective scenes aren’t overly ponderous. But this cast, these writers, and this director have been together long enough to know how to do this show well, and this episode is better than most.

Beyond that one line, Colin Ferguson does some of his best work in this episode, and shows us a side that we’d only seen glimpses of before. Had he made his performance even one step lighter, or cracked it in any way, the whole thing would have collapsed, so bravo, sir, way to carry that weight. Salli Richardson-Whitfield also puts in a poignant performance, at the level of her ill-fated wedding episode. And as I mentioned above, a “really well done” to the new evil overlord.

Sets, lighting, music, editing, sound are all great. Special kudos to the excellent percussion in the opening segment, it was just right. There is one important line that was apparently looped in post production – it is spoken when everyone’s backs are turned – that could be a little easier to understand, but in the scheme of things, not a big deal. As with direction, writing, and acting, a crack job by a crack team.

This season premiere is a welcome Welcome Back. It bodes well for the season, and will make us that much more sad to see it go. It’s always a gift to the fans to go out on a high note, and if this episode is an indication, Season 5 will be a lovely farewell present indeed.

I give Eureka: Season 5, Episode 1 “Lost” Five Out of Five Stars.