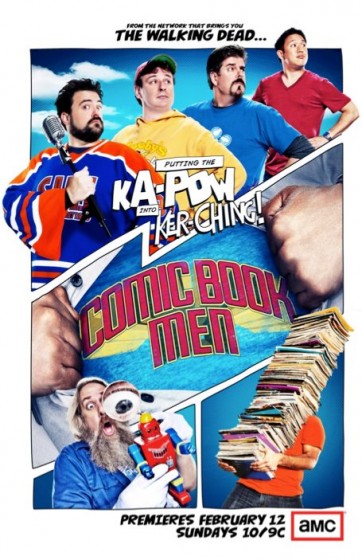 AMC’s new unscripted series, Comic Book Men, dives deep into fanboy culture by following the antics in and around master fanboy Kevin Smith’s New Jersey comic shop, where both staff and customers geek out over mind-blowing pop culture artifacts and the legends behind them.

Leading the crew behind the counter are moody manager Walt, uber-nerd Mike, career slacker Bryan, and Ming, the shop’s go-to whipping boy. As the team buys, sells and discovers the treasures of the comic collecting world, they share all the juicy details with Kevin through their outrageous podcast, which is woven throughout the series. 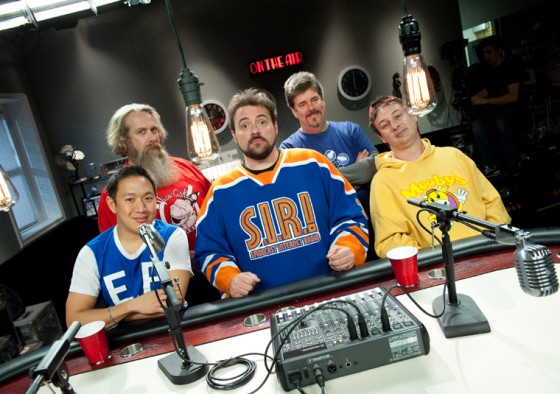 What do I say about a show that alternately makes me literally laugh out loud, sit transfixed, and recoil at the bad behavior? Because that’s this show. And it’s those three things in equal measure, so the majority goes to… yes, I like it. I know, I know; for some of you, all three of those things would make you want to watch, not just the first two.

A lot of Comic Book Men is like Hollywood Treasure or Antiques Roadshow but at the shop level, so instead of a professional appraiser giving an honest value, it’s a shop manager trying to lowball a seller who’s trying to get the most. I shouted at one seller to not take the offer. I guess I got involved. It’s haggling, which I personally cannot do, but I can happily watch and root for one side or the other.

Some really interesting, really cool things come through the doors of the shop, like gorgeous movie posters, excellent old comics, and squee-worthy action figures. We’re given information about each of the items in a comic-type graphic popup that works really well, and they’ve intercut the footage of the in-shop negotiations with pertinent sections of their podcast that talk about the items and the sellers. This often means geeking out over the items as well as giving more information about them, and these guys know their stuff.

Host Kevin Smith is, amongst many other things, an award-winning comic book author; store manager Walt Flanagan is a comic book artist; Bryan Johnson has penned comic books; and store employees Mike Zapcic and Ming Chen are comic book experts. Obviously, all five of them are rabid comic book fans.

I don’t generally listen to podcasts, but I love the podcast section of this show, hearing what the guys have to say about the collectibles, about comics in general, and about themselves. Although it’s led by Kevin Smith, they all have something to contribute, and they have great camaraderie. Mostly. 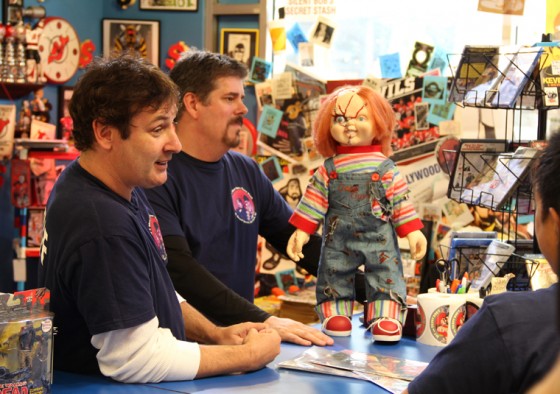 Now for the other part. These guys are really funny. They are also mean. I know that a lot of podcasts and podcasters spend a lot of time slamming nearly everyone who isn’t them; maybe that’s why I don’t listen very often. But they’re in TV World now, and I think maybe it doesn’t translate well, especially when they get busted on it by the TV footage that doesn’t really support what they’re saying.

One of their snarkiness targets during the podcast discussion was one of the sellers. The problem with that, beyond really, do I have to spell out why picking on people is wrong?, is that she truly wasn’t as odd as they made her out to be in their podcast, and certainly not any more odd than any of them; they just seemed to have fun making fun of her. If we didn’t also see the footage, though, we wouldn’t know; I shudder to think of all their non-televised podcast victims who don’t get the visual rebuttal.

But they’re far worse to the fifth member of their crew. When they say in the synopsis that Ming is “the shop’s go-to whipping boy,” they aren’t kidding. I’m not talking about the giving-your-friends-a-bad-time kind of treatment, because this goes beyond. They gang up on him, and he sits there and takes it and smiles, probably like the rest of them had to do all the time they were growing up. Have they become so cool in their geekiness that they’re okay with picking on people? It feels like they’ve just designated Ming as the weakest amongst them and therefore deserving of their disdain. I would get that if it were coming from, you know, people who are attractive but vapid. From these guys? I don’t get it.

But maybe they would say I don’t get it because it isn’t made for me. “By fanboys, for fanboys” is one of their tag lines. Wow, really? I have never and will never, ever be a fan BOY. But okay. I can take it. Just. Like. Ming. For now the good definitely outweighs the bad, and I’m hoping it will keep that balance, or even better, grow up a little. And no, as someone surrounded by bobbleheads and maquettes and posters, I’m not talking about the shop. But go ahead, keep it up, Mean Boys, and I’ll bet you Ming gets his own rabid fan base of mostly women and then you’ll be reminded of what it’s like to be less popular. Just saying.

It’s really interesting, it’s informative, it’s funny, it’s engaging, and it’s fun to watch, except when it’s mean. If you love comics, collectibles, sci-fi movies and TV, Comic Book Men is for you, as it is for me. If you also love bits o’ snarky nastiness, then you will love this show.

I give Comic Book Men Four Out of Five Stars.