TV Review: Being Human, Season 4 Episodes 1 “Old Dog, New Tricks” and 2 “That Time of the Month” 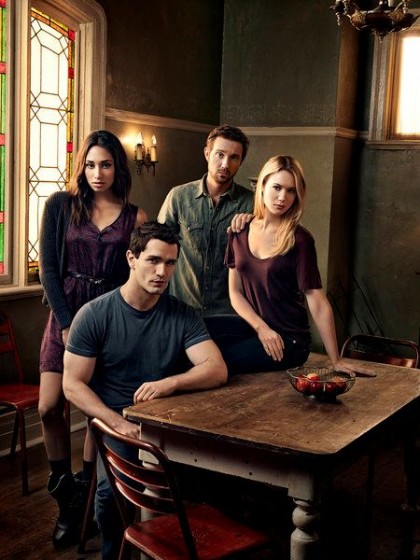 Summary: Season 4 of Being Human picks up four months from last season’s finale and for Aidan, Sally, Josh and Nora, the past is about to come back to haunt them!

Aidan (Sam Witwer) and Nora (Kristen Hager) struggle to save Josh (Sam Huntington) who remains in wolf form. At the same time, visitors from Aidan’s haunted past collide with the present forcing him to make impossible decisions that will affect those closest to him. Sally (Meaghan Rath), having been dragged down into her death spot by witch, Donna (guest star Amy Aquino), finds herself trapped with her foe but newly imbued with her own magical powers that could profoundly change all of their lives.

With the kickoff of Season 4 of Being Human, the series has moved into a full-time spot on my “A” list. Season 1 was great, Season 2 was great but a little uneven, Season 3 was the best yet, but Season 4, at least the first two event-filled episodes, blow the rest out of the water. It is so good.

And as always, that includes the best humor. Since Fringe concluded, Being Human is my favorite comedy, with Sleepy Hollow a close second. Yes, of course they’re both dramas. But most current shows that are billed as comedies don’t make me laugh. Comedy that comes in as a one-liner at times of stress, or some bizarre unexpected thing that happens out of the blue, makes me literally laugh out loud. That’s my kind of comedy. And Being Human brings it in these first two episodes.

Beyond that, the storylines are a perfectly balanced blend of quick resolutions and slow burning, twist-and-turn multi-episode arcs. We were left hanging with a few stories at the end of last season, and don’t worry, we’re right back into them at the beginning of the new season, even though the setting is three months later.

As a quick note, I also love when returning shows do that. Last season started over a year after the events of the previous season’s finale. Being Human‘s writers know exactly how to use this device to make a new season feel and look fresh while seamlessly and intelligently working in the catch-up information we need. It’s never, “so, Sally, what have you been doing for the last year?” “Well, Aidan, as you know…”

Although it’s not surprising that these first two episodes set us up for issues that will develop over the season, we are given little answers, little triumphs and conclusions even in these early episodes, so there is periodic payoff along with the teases and mysteries and crazy-bad situations.

And speaking of payoffs, showrunner Anna Fricke has said that this season will be full of them, for viewers who have been watching from the beginning, and especially those who have rewatched recently. I love when shows give these little gifts to loyal viewers.

That’s not to say that new viewers aren’t welcome. As with any long-running show, particularly a supernatural one, new viewers won’t automatically know what’s going on. But this show, and especially these characters, have become so approachable, intriguing, and full-on likeable that newbies will likely get drawn in pretty quickly, and the mythology of the show is not so thick and inpenetrable that fresh viewers will give up in frustration. So just like I said back in Season 2, and which was true for Season 3 as well, feel free to jump right in.

The crowning triumph of this series is its blend of the supernatural and the elevated ordinary. It has the thrill and imagination of horror, but it’s horror as it is dealt with by really great people that you’d like to know, if not be. There are werewolves and vampires and ghosts and witches, whose biggest problems are that they are werewolves and vampires and ghosts and witches, but they are, first and foremost, people who became these things and yet haven’t lost their humanity.

Watch the first two episodes of Season 4 of Being Human and see how accessible and entertaining and involving and addicting a supernatural show can be. And how excellent. Because these two episodes are absolutely excellent.

I give Being Human, Season 4 Episodes 1 “Old Dog, New Tricks” and 2 “That Time of the Month”, Five Out of Five Stars.