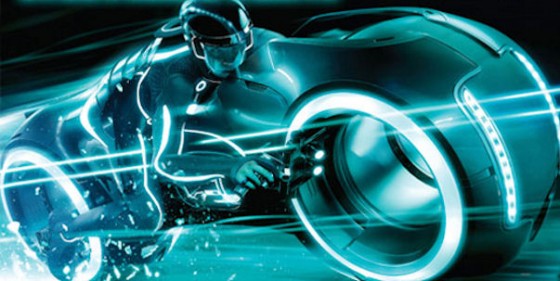 TRON LEGACY‘s viral campaign is on the move once again, so grab your ID badges! Encom has released an official press release, announcing their “Product Announcement” to take place on April 2 in San Francisco, at WonderCon (as we, and others suspected). First, you’ll find the official Encom press release, followed by a video interview that Alan Bradley did with IGN, dirt on a new Viral site, and finally an animated TRON LEGACY poster from Walt Disney Pictures Germany.

Bradley began his career with Encom as a security systems engineer and rose through the ranks to be named CEO in the early 1990s. When he exited the executive suite, he took on a far greater role. His visionary research turned Encom into the industry leader in sustainable production and distribution methods — methods which are now the best practices for technology companies around the world. “Whether the challenge is to establish communications in a national disaster, or keep kids engaged as they battle Recognizers, I love what I do. Encom will always be my home. ”

CEO Kurt Hardington sums it up this way: “Alan’s new title and role reflect his unique position as part of the Encom story. He keeps us grounded, yet he’s the first to move forward when technology takes us in a new direction. That’s why he’s perfect to present our newest product – it’s where we’ve come from and where we’re going.”

Alan Bradley will take the stage at 8pm in Justin Herman Plaza on April 2 to unveil the next generation in Encom innovation.

A new viral site has  popped up for Tron Legacy. Cheat Code is a site that allows you to enter the names of Encom employees and get their password and username to login into the Encom International Employee Intranet and view other employee’s emails.

Here’s one example of an email I found when I “hacked” into Alan Bradley’s account. 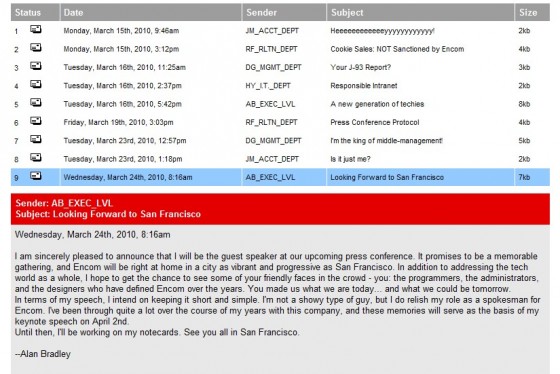 This site also leads to yet another site HERE that shows the virtual desktop of Kurt Hardington, Encom’s Chief Executive Officer. Once on his desktop, you can click the logo in the upper left-hand corner and then click System Chat, which will enable you to watch a video conferencing conversation between Hardington and another Encom employee, who are discussing Alan Bradley.

Finally, Walt Disney Germany has released this shiny TRON LEGACY animated poster, check it out below and let us know what you think in the comments!

TRON LEGACY: Animated Poster
[If you don’t speak German – Click the icon in the top right corner to re-start the animation]