This week’s Grimm will be featuring an actor who’s been playing a lot of “angry man” roles since he moved on from inhabiting the beloved Charlie on Fringe. That’s right, it’s Kirk Acevedo, recently on many of our screens as Mitch on The Walking Dead, not a happy guy.

Tonight on Grimm he plays a solider, but that’s all we know; sadly, he does not appear on the TV spot, nor in the synopsis other than in the headline. That’s okay; we’ll wait if we have to. Here’s that synopsis, followed by a picture of the wesen of the week (it’s not Kirk, FYI), and the TV spot:

THE GOOD SOLDIER (TV-14)
NICK AND HANK INVESTIGATE A SERIES OF VETERAN MURDERS WHILE MONROE MEETS ROSALEE’S FAMILY FOR THE FIRST TIME — KIRK ACEVEDO AND EMILY RIOS GUEST STAR — Nick (David Giuntoli) and Hank (Russell Hornsby) are called to the gruesome murder of a veteran working in home security. During their investigation, they discover this might be one of several revenge killings regarding a horrifying cover-up involving members of the army and military contractors. On the domestic front, Monroe (Silas Weir Mitchell) accompanies Rosalee (Bree Turner) during her long overdue reunion with her mother and sister. In Europe, Adalind (Claire Coffee) sees hints of what she thinks might be her powers returning. Bitsie Tulloch, Sasha Roiz and Reggie Lee also star. 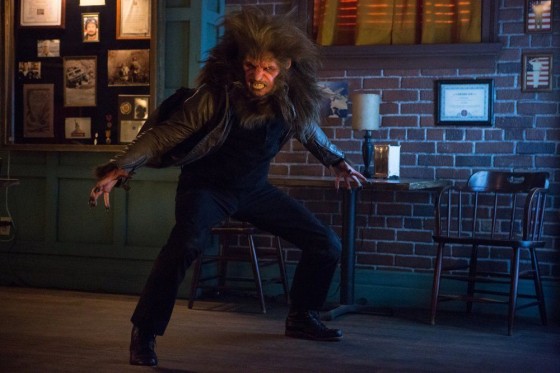