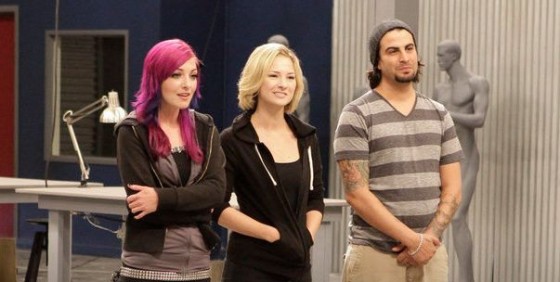 We love Face Off, and Season 3 has been particularly good. Sadly, we’ll be carefully blotting our farewell tears to Season 3 tomorrow during the very special season finale. Though we’re not exactly sure how this voting is going to work, we are confident that we’ll receive instructions tonight during the broadcast of what should be the final challenge.

Viewers will decide the winner through voting. Plus: submit a question for the judges or contestants – and they may answer it on air!

Face Off will broadcast its third season finale LIVE from Los Angeles on Halloween night – Wednesday, October 31 – at 10/9c. For the first time, America’s voice will be heard as viewers will make the final choice for the season three champion via a live voting feature that will be available immediately following the October 30 episode. McKenzie Westmore will host the special event and reunite the contestants, including the three finalists. They – along with the rest of America – will find out LIVE if they garnered enough viewer votes to win the season.

The judges and contestants will answer fan questions live – and you don’t need to be in-person to participate.

To submit a question, tweet it along with #AskFaceOff and then tune-in on Halloween to see if it gets answered on air.*

Face Off is hosted by McKenzie Westmore, along with judges Ve Neill (The Hunger Games, Pirates of the Caribbean) and Glenn Hetrick (Mad Men, Heroes). New to the judging panel this season is Neville Page, Lead Creature Designer on Avatar (the highest grossing movie of all time) and Character Designer on Ridley Scott‘s recent blockbuster Prometheus.