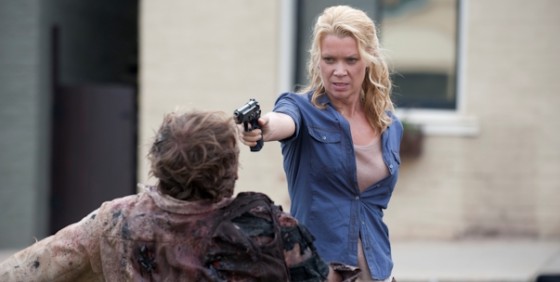 Yes friends, The Walking Dead is continuing its inexorable climb up and over the chain link fence that once separated cable ratings from network ratings. On Sunday’s midseason premiere it in fact devoured ALL other shows in its timeslot with a whopping 12.3 million viewers.

When Season 3 premiered in October it saw series-high ratings, as it has done for every season premiere, and set a record for cable series viewing. But now, my horror-loving friends, it is garnering what is considered “mainstream numbers.” If you’re like me, your eyes glaze over when people start talking about numbers, so I’ve added some emphasis to make it obvious what is so cool about these particular numbers, from AMC‘s official The Walking Dead Blog:

AMC‘s Midseason Premiere of The Walking Dead returned with its largest audience ever in series history delivering 12.3 million viewers at the 9/8c premiere. The previous record was 10.9 million viewers from the Season 3 Premiere on Oct. 14, 2012. The episode is also the strongest telecast for a series in basic cable history for adults 18-49 with 7.7 million. These results shatter the hit series’ previous record with an increase of +6% (A18-49) over the Oct. 14, 2012 Season 3 Premiere. The Walking Dead Season 3 series average for adults 18-49 delivers 6.8 million, outperforming other television series season averages including Modern Family, The Big Bang Theory, Two and A Half Men, and NCIS. In addition to the 9/8c premiere, the show encored at 11/10c, and 2AM/1c, delivering 16.6 million viewers for the night.

The show also took over social media, and in fact crashed Get Glue. Take a look at these numbers: 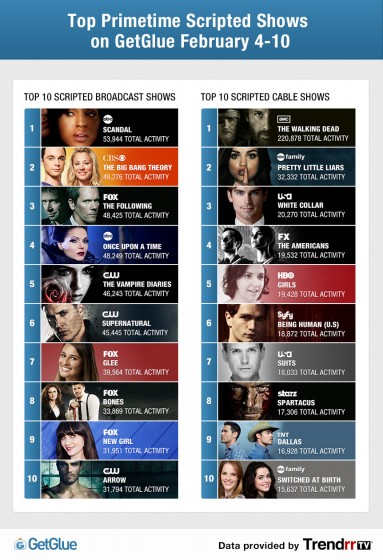 Okay, that is just crazy. And so excellent! Of course it means that of all my “normal” (non-horror-watching) friends who say they would never watch such a show are either the only people not watching it, or they’re fibbing. Come on out and be proud, normal friends! You’re still normal!